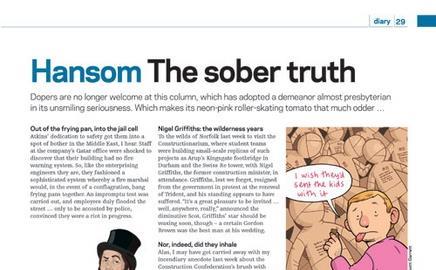 As reported in Hansom, (22 June, page 29) I can confirm that I have recently resigned from the position of deputy chairman of the Construction Industry Council’s sustainable development committee. However, most other aspects of your short report are misleading.

Hansom said I wanted the group to back contraction and convergence (C&C) but the group had said no. Well, actually, it said yes at both of its last two meetings. I resigned to open up a vacancy for a new deputy chair and an eventual successor to the current chair.

The piece referred to C&C as an “initiative”, but it would more accurately be dubbed: “the global solution to climate change” or “the post-Kyoto global carbon emissions framework necessary for human survival”. Quite some initiative, that!

Last year, Building’s website accurately and succinctly described C&C (11 October): “RIBA takes lead on climate change – the RIBA becomes first construction body to sign up to global carbon emissions scheme.” Then, C&C had been endorsed by the House of Commons’ environmental audit committee, the Greater London Authority, the Scottish parliament and the Corporation of London. It has since been endorsed by many others, including the Society for the Environment.