There were a few regrets this week – a football fan bemoaned deserting the beautiful game, an awkward conversation was conducted, and my hack went on a rail journey littered with hopes and dreams

On a recent train ride from London to Liverpool, one of my team was on the way to a wedding but ended up on a busman’s holiday – passing the half-built Midland Met hospital as the train lumbered through Birmingham before passing the half-built Royal Liverpool on the way to the city’s Lime Street station. For good measure, the train also stopped at Wolverhampton – former home of bust builder of both hospitals, Carillion. By the end of the journey, my colleague was a little depressed.

A colleague of mine recently went to an Innovate UK briefing on transforming construction funding and jolly interesting it was too, by all accounts. However, there was a rather awkward exchange between my hack and a construction bod attending the event – names have been redacted to avoid embarrassment – that went something like this:

Him: “Yes, we do building projects. We’re a contractor and engineer.”

Building bod: “No … I meant I’m from Building magazine. I know what Costain is.”

Lift music can be irritating at the best of times but particularly so when one finds they might have to pay to turn it off. The London School of Economics’ latest flagship project was unveiled this week when the Centre Building by Rogers, Stirk, Harbour + Partners opened on the university’s Aldwych campus. State-of-the-art lifts glide up and down its 12 storeys but upon entry passengers are met with a disarming blast of pan pipes. Even worse, disgruntled building managers have discovered that to mute the offending tones might require paying the lift manufacturer a financial fee since the music is apparently an integrated part of the original lift purchase package. Gives a whole new meaning to the phrase “silence is golden”.

Noble Francis, the Construction Products Association’s economics bod, popped up on The Guardian newspaper’s football blog The Fiver last week. Francis, a keen Sheffield Wednesday fan and a regular contributor to the blog’s letters section, noted that instead of watching the recent Arsenal v Spurs clash (which ended in a 2-2 draw), he’d been at the Proms watching a performance of Tchaikovsky’s symphony No 2 in C minor. He described it as “a piece that was an initially joyful success before rapidly fading and considered thoroughly unsatisfactory by its originator due to a raft of basic errors. I could have just gone to the game instead.”

I see Prince Charles has agreed to be the Royal Town Planning Institute’s patron for another year. Readers will recall that 2019 is the 35th anniversary of HRH’s infamous “monstrous carbuncle” speech, which saw ABK Architects’ design for the National Gallery extension scrapped, to be replaced by a more “traditional” design by Robert Venturi. The heir to the throne has held the patron role at the RTPI since 1989 and is likely to be keeping a watchful eye on the work of the Building Beautiful Building Better Commission. Whether he likes what he sees is another matter. 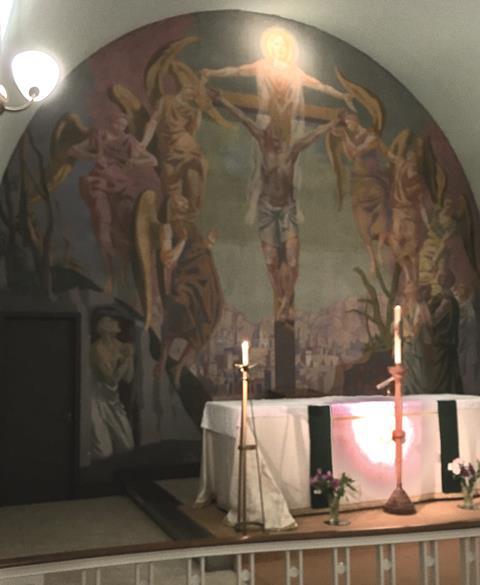 Last Saturday, 7 September, marked the 79th anniversary of the start of the Blitz. The bombing campaign, among its consequences, radically transformed the look of London and the effect is still being felt across the capital today. I happened to be visiting Holy Trinity, a church in Rotherhithe, on the that date, and discovered it was the first place of worship in London to be destroyed on that fateful day. The church was rebuilt in the 1950s, with the mural behind the altar painted by a German Jewish refugee who had escaped Nazi Germany before the war and produced the mural as a gesture of thanks for being looked after by the local community during those dark days … moving stuff.