It’s all about friends in high places this week, from royal consorts, to OBEs, to those jammy fellows who win radio quizzes. Throw in an inappropriate meeting in a hot tub to seal the deal …

The industry’s musical muse, UKCG boss Stephen Ratcliffe, has sadly slumped to a crushing defeat in a public test of his classical music knowledge on Radio 4’s Counterpoint, broadcast on Monday. His specialist subjects were Scott and Byron which, he says, went “OK”. But there was tough competition in the form of the editor of the Jewish Chronicle and even a former Mastermind finalist. Ratcliffe came last. “And the journalist won,” he says. We at Building Towers could have predicted that …

So Capita Symonds has bagged itself quite an impressive new non-executive director in the shape of Vice-Admiral Tim Laurence - CB, MVO, ADC, second husband to Princess Anne and royal wedding invitee. But the most relevant experience the admiral has is as chief executive of Defence Estates until May last year. He has now hopped aboard the good ship Capita just as it is bidding for a lucrative partnership contract with DE’s successor. No sign of what our dear prime minister has called the “far-too-cosy relationship between politics, government, business and money” there, then? Never fear, I am assured his appointment has been vetted by the proper authorities and that the admiral is not allowed to bring his impressive book of government contacts with him to the private sector.

But then, Capita Symonds is well versed in hiring former servants of the state.

In June 2009, Archie Robertson OBE joined as another non-executive director, having left his position as Highways Agency chief executive a year before. The government board that scrutinises former civil servants who leap over to the private sector placed no restrictions on him lobbying on behalf of Capita Symonds, as it does with some others.  Robertson was also director of operations at the Environment Agency - one of the bodies that Capita Symonds is now hoping it can help collect fines for.

View from the top

All eyes were on Westminster Abbey last Friday for reasons you could hardly have failed to miss. If you were watching the wedding in Europe, however, you might have seen it through the eyes of the Royal Institution of Chartered Surveyors. Let me explain: the RICS, with its almost-perfect view of Parliament Square, hired out a spot on the fifth floor to European TV network RTL to broadcast the royal nuptials across the continent. Not a bad day-to-day view for chief executive Sean Tompkins either.

We’re not sure how Arup recommends its employees conduct business, but if a recent tweet by director Peter Head is anything to go by, it’s done in a Reykjavik hot tub. On a trip to Iceland last week “to help explore what the Ecological Age model could mean”, the engineer and sustainability champion - who cut his teeth on mega infrastructure projects, such as the Severn Bridge Crossing - posted last week: “Business deals in Iceland depend on being in the right hot tub at the right time - the benefit of loads of geothermal energy.” What are we to make of that?

Forget expensive alarm systems and formidable fencing to fend of potential plant thieves from construction sites. Boffins at Birmingham University have had a much cheaper idea: paint your diggers bright pink. “Criminals don’t generally want to go to the bother of repainting a vehicle. They want to steal and sell on plant as quickly as possible. They are after a fast profit with minimal hassle,” says Professor David Edwards. Turning a pink digger into a yellow one is not going to be easy for thieves. One problem, though - if everyone takes up this idea, and all diggers are pink, then won’t we just be back to square one? 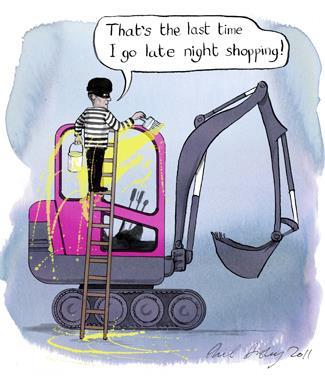