Hansom: For one week only!

Roll up, roll up … see the strong man lift the BSF bid document using only two transit vans! See Mr Memory forget his own policies! And, of course, we have beautiful buildings … totally nude!

Stunell the stumbler
Andrew Stunell was the junior minister who drew the short straw of defending the government’s housing policy in parliament last week. Alison Seabeck, his Labour opposite number, reminded him that he had once tabled a motion calling for an increase in funding for social housing to provide more secure tenancies. Worse was to follow when he attacked Nick Raynsford for following up a story in Building that the New Homes Bonus discriminated against redevelopment schemes. Unfortunately for the Rt Hon Stunell, he had to admit later that Raynsford had been right. “I’m quite content to confess that my adrenalin got the better of me,” he mumbled.

The Knight’s tale
Michael Gove has loudly proclaimed the unnecessary bureaucracy of the Building Schools for the Future programme, and it seems he may be closer to the truth than he knows. I hear his predecessors in the Labour government never got to hear some good ideas for improving the scheme because of … excessive bureaucracy. Former schools minister Jim Knight told a gathering at Portcullis House last week that his advisers almost never passed on suggestions from the private sector. “One company did get a proposal onto my desk, but it’s hugely difficult,” he said, before adding: “Party conferences are best as you don’t have civil servants there.”

Talking of BSF …
Did you hear the one about how manyvans it takes to submit a BSF bid? No? Well, I hear that in Brighton during the glory days of New Labour’s school building programme, it took
two vans to carry all the submission documents for one school project. The client wanted everything in hard copy, you see. Or maybe it just needed some extra backfill for the foundations. 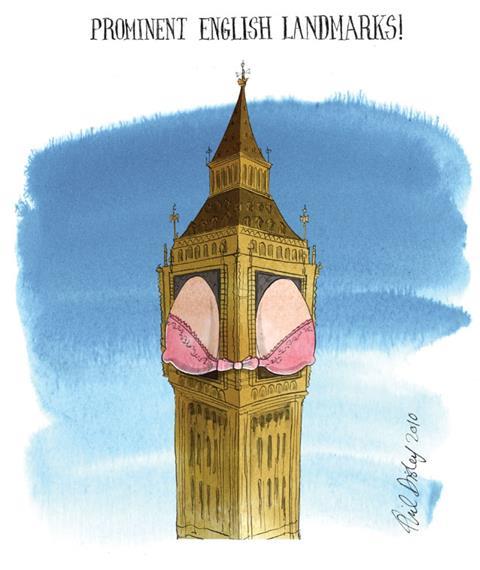 Uplifting
Respectable architectural practice BDP may not be the first place you’d go if you wanted to view acts of quasi-pornographic vandalism, but it turns out that it is allowing its Clerkenwell head office be infiltrated by, er, “boob-jackers”. It seems, Peter Drummond’s outfit is making office space available to a cancer awareness charity called CoppaFeel!, which will add images of breasts onto prominent English landmarks. I expect BDP will play its part with a the inventive use of cantilevering and the odd perky little cupola …

We love each other really
Last week I noted that Cala Homes had failed to round up any major allies for its plan to ask for a judicial review of the decision to scrap regional spatial strategies. As you may recall, the rumour was that the communities department had put the frighteners on firms that might have teamed up with the Scottish housebuilder.

This week, it was Costain and Skanska that were subject to political reality. They had won a £300m contract to upgrade the A14, until it was scrapped in the spending review. But I hear there are unlikely to be any complaints.

“Would you want to piss off the Highways Agency?” asks one insider. Like an abusive relationship, the worse the government treats poor builders, the needier they become.

Once upon a time in the Midlands
The Cube in Birmingham has already caused a stir in architectural circles, but it now seems to have gained a role in a movie. Dev Patel of Slumdog Millionaire fame was spotted being filmed leaping adventurously from the roof of a moored barge onto a towpath, with Ken Shuttleworth’s metallic box forming the surreal backdrop. Rumours that the Shard is to appear in the next Pirates of the Caribbean are unconfirmed.