What happens when an unstoppable force meets an immovable object? Belgium has the answer. Plus, unexploded grenades, architectural chess and a novel way of cutting back on costs

One of my hacks came back from a recent conference on the nuclear power industry intrigued by the response of Duncan Hawthorne, the chief executive of Horizon Nuclear Power – the company that wants to build a nuclear power station at Wylfa Newydd on Anglesey. A tier 2 supplier wondered how long he could keep explaining to his board why his company should carry on “providing extensive unpaid supply chain support to the Wylfa project”. Hawthorne quipped: “Anyone who wants to help us unpaid is very welcome.” Some main contractors might think the joke all too real, mind, given the sort of margins they’re operating on …

May I be excused, sir?

As any developer will tell you, digging foundations on building sites can unearth the unexpected. For example, work at Bloomberg’s new headquarters building in the City of London was delayed after contractors came across a treasure trove of Roman artefacts. But delays can also result from less benign finds. Last month, contractors working on a new ice rink in Cambridge discovered a number of unexploded grenades in the ground. The site was evacuated and a controlled explosion took place. My eye was caught, though, at the news that the grenades are thought to have belonged to the Home Guard during the war. As a Dad’s Army addict, I’m blaming Private Godfrey myself. Perhaps he was caught short and forgot where he’d left them.

The usual pre-Christmas PR fluff was doing the rounds last month, including some rather tenuous links to van drivers’ favourite Christmas songs – though “Get out of my way, I own this road, I don’t care if it’s Christmas” didn’t make it onto a list of the top 10 favourites. Also included was a rundown of the 10 roads that van drivers most try to avoid. This is, in fact, quite a handy list to keep: if van drivers aren’t on them, that can only be good for the rest of us.

Planning red tape over here is enough to drive anyone to distraction, but in Belgium it seems to have tipped one architect completely over the edge. Passers-by in the Flemish town of Keerbergen were recently moved to comment after seeing a building slowly envelope a street lamp. The architect, unnamed, informed a local news website that this represented a “creative solution” to the problem of authorities taking more than two years to move the post. “The administrative sluggishness of the municipality in this case has been shocking,” he fumed. His pluck seems to have been rewarded: the utilities company responsible for the post moved it to the other side of the road shortly afterwards.

Here’s Cenkos analyst Kevin Cammack’s take on news that a £350,000 house in Colchester, Essex, has been bought using bitcoin, the cryptocurrency favoured by a certain sort of person. Kevin thinks he knows who. “No doubt the buyer sports a full beard but no socks and commutes to Shoreditch,” he suggests. Given that the buyer is supposed to be a man in his 20s working in the technology industry, who is planning to rent it out in bitcoin too, he may have a point… 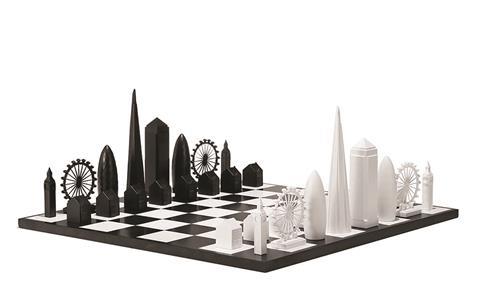 For those thinking they might have gone awry with a recent Christmas present, I give you the Skyline chess set featuring prominent buildings that illustrate the capital’s breadth of modern architecture. Of course, you may well baulk at Renzo Piano’s Shard representing the king, or César Pelli’s One Canada Square as the queen, but you can’t deny the iconic status of the buildings represented, which include Foster + Partners’ Gherkin (bishop) and Marks Barfield Architects’ London Eye (knight). A US version of the set is also available. All in all, an ideal opportunity to win back some brownie points after any Christmas present disasters. Provided the recipient likes chess, of course.