Standard forms of contract encourage, nay insist, on claims. None of them say, “load the bid price to give room for being messed about, disrupted, delayed”.
They say the very opposite. They say that if the contractor is put to more expense by the employer, it should make a claim. And that’s why claims experts (we call them “claims consultants”) have, in these 40 years, flourished. Just last week, though, a fly flew into the ointment. A court ruled that private documents between a claims consultant and its client were not private, not secret, didn’t attract what’s called “legal professional privilege”. That’s embarrassing. Makes life awkward for some. Can you see why?

Knowles is one of the top construction consultants - successful and respected. A typical appointment for Knowles arose when DMW Developments decided to buy and
re-build a few properties in posh Chelsea, in the Boltons. Don’t come knocking without £20m in your wallet … for each house.

Seemingly, the work suffered delays. The main contractor, Walter Lilly & Co, began to put in claims for extensions of time and disruption, and consequential loss and expense. DMW made a sensible decision. It told the architect and QS to stand aside on all this to let the claims experts deal with the contractor’s hand held out for more money.
Now, a claims consultant spends all day doing contractual stuff. He has to crawl all over the rules, express terms, implied terms, conditions precedent; construe the contract; and know his law of contract, and tortuous and equitable principles. Wow, he has to be a lawyer as well as a bloke who knows all about putter-uppering, soffits and arrisses. He is much more than a solicitor or barrister - he is a claims consultant. I expect that if you saw the filing cabinets in Knowles marked DMW, it would be heaving with pages of legal advice for the eyes of DMW and Knowles only.

Walter Lilly decided to litigate against the developer. One of the procedural features as you head for trial is called “disclosure”. The idea is that each side is entitled to have a copy of any correspondence that is relevant to the dispute. So, Walter Lilly asked for copies of all the paperwork between Knowles and its client, DMW. That caused the balloon to go up. DMW said that this advice from the claims consultant was for nobody’s eyes outside of DMW because of the principle of legal professional privilege.

Walter Lilly asked for copies of all the paperwork between Knowles and its client, DMW. That caused the balloon to go up

This category of privilege exists so a client can go to a lawyer and place unrestricted confidence in them, assured that the communication will remain secret. That rule applies whether or not litigation is pending or contemplated. This rule does not apply to any other professional relationship - between accountant and client, medic and patient or priest and individual.

You might see why DMW winced at the idea that what was said between it and its claims consultant was to be given to the opponent. Nevertheless, that’s what the judge ordered in the construction court on 15 March. The rule is plain - legal professional privilege only attaches to your dealings with a solicitor or barrister; no other profession has this feature. The idea behind this is to provide boundaries for the circumstances of keeping secrets. It becomes fuzzy-edged if you switch the test to the type of advice. So, if an accountant explains the law of taxation to his client, it’s not a secret in litigation; it is if the tax law advice is from a solicitor or barrister. This rule can be traced back to 1792.

Knowles was engaged for contractual and adjudication advice. Nothing specified that it would be advice from a Knowles solicitor or barrister. In which case it is fairly plain that it was not a service for legal advice. The two people at Knowles dealing with DMW were barristers, but they were “non-practicing”, which means they were called to the bar, but did not complete their pupillages. In short, if you are a practising solicitor or barrister, correspondence is secret. Act as a claims consultant, and it can be disclosed.

None of this these days is realistic. Claims organisations are a one-stop-shop for technical guidance in construction and operation of contract documents and dispute systems. It is doubtful that the law is keeping up with business demands. 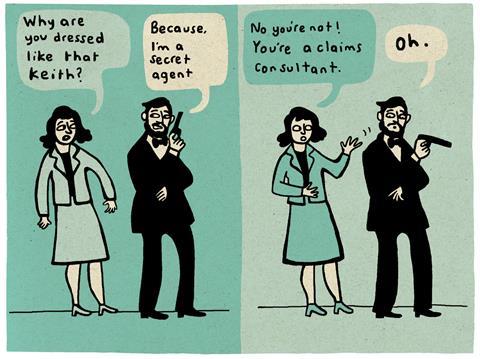