The industry faces many challenges today, but this week highlights the more unusual hurdles. Lightning and leopards endanger architects, boats prove tricky to steer – and the RICS has trouble counting

Imagine you won five Olympic gold medals, like Sir Steve Redgrave. What you expect to get next? A knighthood? The endless adulation of the public and fellow athletes? A relaxing retirement? Well, things have worked out even better than Sir Steve could possibly have imagined, for he was treated to a place in a 20ft model oil tanker alongside Gleeds’ senior partner Richard Steer. The vessel was erratically paddled about by the pair on a boating lake in Southampton - and here’s the link - because Gleeds project managed the construction of a “manned model ship handling centre” at Timsbury where the miniature tanker is used. Apparently, Sir Steve and Steer were not quite subtle enough with the controls, and crashed into several pontoons. Hopefully we’ll see a slightly sleeker boat used at London 2012.

With reports of the Rapture apparently wide of the mark, most in the industry believed they were safe from the wrath of the Almighty. That was until a brief, yet thunderous, downpour swept over London on Thursday last week, and one ill-favoured architecture practice was struck by lightning. I’m not aware of Sheppard Robson doing anything particularly sacrilegious, but could this be a warning against its recent decision to open an office in Abu Dhabi?

Slice of Halifax, anyone?

Architect BDP’s 50th birthday bash at the RIBA last week was an emotional occasion for all those involved in the practice over the years. No more so than for its former chairman, Richard Saxon, who designed the celebrated Halifax Headquarters building for the practice in 1974. He was given the opportunity to eat his own building, in the form of an enormous cake built and decorated to the exact specifications of the original. “It’s not every day you get the chance to do this,” he said, with some understatement. Cheers, BDP.

Before you go into business, you need to know the market. So you would presume that an organisation accrediting quantity surveyors - the Royal Institution of Chartered Surveyors, for example - would know roughly how many QSs there were in the UK? Er, apparently not. Asked by one of my minions, the RICS said that it “did not have those statistics”. It knows how many QSs are members of the RICS, but not, it seems, how many have “gone rogue”, presumably hiding out in forests and caves, in order to escape its fees.

I’ll do it my way

A few years ago, architectural sage, Dickon Robson, was charged by the RIBA to work out what the future held for the profession. In April he came back with his findings. Among them was the perhaps
none-too-startling revelation that architects prefer to set up their own practices, rather than club together to take on the global engineering powerhouses. The study concluded this is very counterproductive. Is the problem then, as a hack of mine suggested, that architects are egotists? The maverick Dickon was all too happy to agree.

It’s a jungle out there

One of my other fellow hacks at BDP’s anniversary bash last week was startled to hear from one of the practice’s architects about the hazard of leopard attacks on a project he was working on in the foothills of the Himalayas. The team on the university campus project have had to think long and hard about how to overcome the threat of hungry big cats. “It’s a natural hazard of the site,” the architect said. “As part of our masterplan we are moving the local water sources further up the hill so that leopards don’t eat the students.” Not a common consultant’s dilemma, it has to be said. 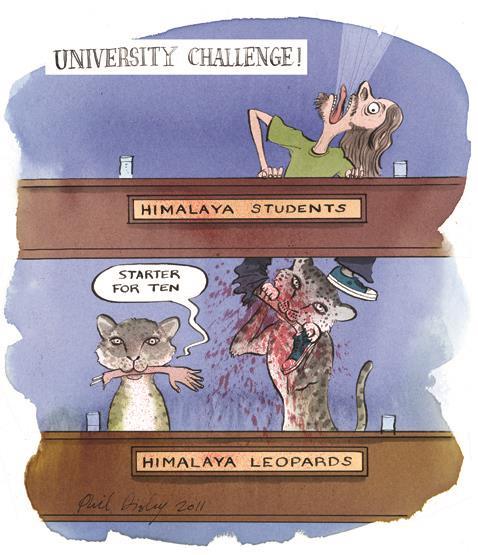