London’s the place to be

The London commercial sector is strong, but the regions are still weak

So far this year, the shares of virtually every construction and housebuilding firm have outperformed the FTSE All Share index. It’s no different for the listed Real Estate Investment Trusts (REITS), which have also outperformed the UK stock market in recent months.

This week, a relatively upbeat trading update from Hammerson showed a strong turnaround in profits during 2010, despite falling rents. A tighter focus on costs increased profits and a £447m upward revision to the value of its investment portfolio certainly helped with its share price increase. On the day of its results (21 February) its shares were up 1.7% while the stock market was down more than 1% because of rising tensions in the Middle East.

This makes Hammerson the best performing REIT over the last week, closely followed by Land Securities, which doesn’t report its full year results until 18 May.

Land Securities may have been clinging to the coat tails of British Land, which provided a boost to the sector last week as it released strong third quarter figures. Its profits for the third quarter, covering October to December 2010, were up 6% on a year earlier, while the value of its assets increased by 13% year-on-year, to £9.3bn.

British Land is currently working on, or about to start on, a number of high profile commercial projects such as the £340m Richard Rogers-designed Cheesegrater on Leadenhall Street and a head office for investment bank UBS. Great Portland Estates also gave investors an update this week, regarding a lease swap covering two properties on Oxford Street in central London.

The London commercial sector is the place to be at present. With the office market set to suffer from space shortages in the next couple of years, firms such as Land Securities and British Land should prove to be long-term winners if strength there can offset weakness in the regions. 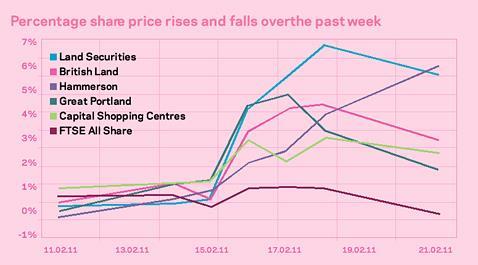