Love the one you're with

As is fitting for the week of Saint Valentine, relationships have been hotting up in the industry. From sharing a romantic dinner a deux, to tackling the opposition, to swapping saliva, Cupid’s been busy!

What shall I have for dinner?

You would have thought that the chief operating officer of a company with a turnover of £12bn would be able to make a speedy decison. Not so Andrew McNaughton, COO of Balfour Beatty. At a dinner last week, McNaughton was so foxed by the menu at Villandry that he couldn’t choose his meal. It wasn’t exactly haute cuisine; choices included chargrilled rib eye steak and line caught cod. In the end McNaughton gave up and got a fellow diner, Baroness Jo Valentine to choose for him. It had been a long day. Let’s hope McNaughton was back on form for work the next day.

Checking out the competition

The back-to-back scheduling of two of the industry’s annual bashes at Mayfair’s Dorchester Hotel gave one of my colleagues a unique opportunity to compare the two. The Electrical Contractors’ Association dinner featured guest speakers Paul Morrell and Lord Digby Jones, but the main talking point was the end-of-night performance by classical girl-band, Raven. The Chartered Institution of Building Services Engineers trumped this the following night by filling the room with smoke prior to their awards, which was presented by an effusive and entertaining Huw Edwards who began rooting for any nominees - provided they were Welsh. One nil to the CIBSE, I say.

Rugby can be a terribly fickle game, with perhaps the most unpredictable ball bounces in sport. Equally uncertain is whether paying for an advertising hoarding at the Six Nations tournament will ever be worth it. Fortunately for Gleeds, Chris Ashton’s swan dive try against a pitiful Italian side on Saturday was right in front of the QS’ pitchside logo, meaning millions of viewers absorbed subliminal messages about cost consultancy as they watched the slow motion highlights that evening. Word has it that the Gleeds partners have a sweepstake on how much exposure the hoarding will get during England’s next game against France. I wouldn’t bet on too many tries.

When the government announces it intends to cut your organisation by 35%, having one of the ministers responsible pop round for a visit is unlikely to go down well. So it was when Chris Grayling, minister for employment, paid a visit to the HSE headquarters in Bootle. His welcome was far from warm. Not only that, Grayling arrived over half an hour late and was unable to get round all the various HSE departments - I’m sure those who missed him were dismayed.

My cup runneth over

London has 108 Livery Companies. At a dinner last week for The Worshipful Company of Constructors, one long-standing and revered tradition proved very popular. The “Loving Cup” was passed around, following a tradition dating back over 1,000 years. This is a large trophy-like cup, with a lid that is removed with the right hand while another drinks. Why the right hand? Well, it keeps the “dagger” hand occupied and protects the drinker from assassination. If only a similar ritual could be devised to prevent suicide bidding, the industry might survive another thousand years.

Bid teams are working curiously quickly to get in their submissions for the cable car scheme that will cross the Thames to link North Greenwich and the Royal Victoria Dock. Once the plans are in, the winning design will be selected in just six weeks and then construction is scheduled to be as fast as possible, I hear. With such a ponderous form of transport, why the rush? “It’s due to be done four days before Boris faces re-election,” says one insider. First the Boris Bikes, now this. What is it with this mayor and photo-opportunities of novel ways of traversing the capital? 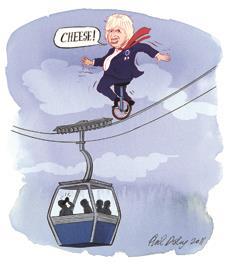