The lovely new home you just bought is covered by the Defective Premises Act if it’s a new dwelling. But if it’s a massive refurb job, you might find yourself in need of a spade

There is an unintended hole in the act of parliament that is supposed to protect house purchasers from defects. Come back with me umpteen years when Mrs Bingham and I bought our first house. The rule then, and for centuries before, was caveat emptor - Latin for: Let the buyer beware. We had no comeback from the seller for defects (an express defects clause being absent), even if the seller was the builder. Eventually there was a fuss about that old law. So in 1972 parliament invented for you and me - and Mrs Bingham - the Defective Premises Act. The very first paragraph puts a duty on anyone taking on work for, or in connection with, the provision of a dwelling, including conversion or enlargement, to see that it is done in a “workmanlike and professional manner” so that the dwelling is fit for habitation when completed. Watch out for the hole not only in the roof or basement, but in the words too.

The Jensens claimed damages under the Defective Premises Act 1972. The PM’s defence was that the act’s wording only applies the duty to the provision of a new dwelling

In 2003, Mr Green owned 105 Leathwaite Road, Battersea. He engaged Spencer Roy Faux to project manage significant building works on the dwelling - £400,000 worth of gutting and remodelling from basement to roof. Then Mr and Mrs Jenson bought it. Then the basement flooded, apparently due to problems with the waterproofing. The Jensons told the project manager that he had taken on the management works in connection with the dwelling and even though he had no contract with these new owners, he was under a duty to them to see that the waterproofing was done in a “workmanlike and professional manner”. They claimed damages under the Defective Premises Act 1972. The PM’s defence was that the act’s wording only applies the duty to the provision of a new dwelling.

Just hang on a moment. This house had its loft completely remodelled. It had the first floor demolished, rebuilt, room layout remodelled. It had the ground floor entirely gutted, new walls, new this, new that. It had the old coal cellar excavated plus new basement access from new stairs. What do you mean by suggesting this isn’t “new”? Well, let me tell you it jolly well isn’t new and it jolly well isn’t within the rules for dwellings in the words of the Defective Premises Act. The act only covers the provision of a dwelling. In other words it covers the conversion of a building to a dwelling and it covers the enlargement of a building to a dwelling but it does not cover the conversion of a dwelling to a different or better or worse dwelling. All this is made plain by the binding decision of the three-man Court of Appeal.

The Court of Appeal said, interestingly, that since 1974, cases on this opening part of the Defective Premises Act were not easy to find. They could only find two. They agreed with the earlier cases. The rules only apply to the provisions of a new building, or something that counts for a new building.

Home refurb work doesn’t come within the Defective Premises Act. So buyers can’t reach for anyone’s throat if the home turns out to be seriously defective

So, had 105 Leathwaite Road been converted so as to produce separate flats the Defective Premises Act would have applied. In fact a previous Court of Appeal went as far as to say that if the works to an existing dwelling had been so extensive as to justify the conclusion that they had provided a new dwelling, the identity of which was wholly different from the old, it would be within the act. In short, it has to create a new dwelling - not the rectification or mere improvement of an existing dwelling.

OK, the position taken by the court is very firm. But it is high time that this 37-year old act was given a refurb. Countrywide there is a massive amount of home refurb work. And a mass of it is done so as to tee the home up before putting it on the market. None of that comes within the Defective Premises Act. So, the buyers can’t reach for the throat of the contractors, suppliers or project managers if the home turns out to be seriously defective. Even if a chartered surveyor was engaged, the iffy waterproofing to a basement wouldn’t show up - through no fault of the surveyor. Instead spend much more on a detailed survey; even then a latent defect can go undetected. So come on parliament. This refurb of the act is right up your street … and the next and the next. 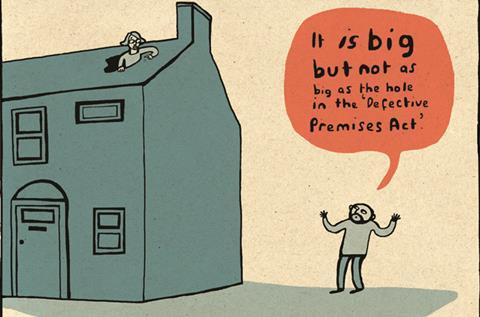 Tony Bingham is a barrister and arbitrator at 3 Paper Buildings Temple. You can now follow Tony on Twitter @TonyBingham2