What's driving firms to the wall?

Voluntary insolvencies jumped 20% in the space of a quarter, with 586 firms voluntarily liquidated in the first three months of the year, up from 468 the previous quarter.

The number of firms that fell into administration in the first quarter also rose to their highest level for over a year.

101 firms called in administrators in the first quarter – the highest number since the third quarter of 2009.

Martin Kelly, director of restructuring at administrators KPMG, says the administrations figure is particularly worrying as this category encompasses the largest corporate failures.

“We may not be seeing the level of insolvencies we saw in 2009 but that was when the recession was first kicking in and a very large number of small players were going under.

“A lot of people are saying things are getting better but I don’t think that’s the case. After the fourth quarter of last year people said the number of insolvencies was low but two of those failures were Rok and Connaught.”

A combination of squeezed margins and lengthening payment terms are pushing firms closer to the edge, Kelly says.

“Firms are being subjected to ongoing delays, particularly in areas where there are disagreements. Everything that’s subjective seems to be pushed out.”

He predicts a difficult year ahead for construction firms as cash flow pressures continue to bite.

“If things stay as they are then that cash flow pressure is not going to be alleviated and it will be a very tough year.” 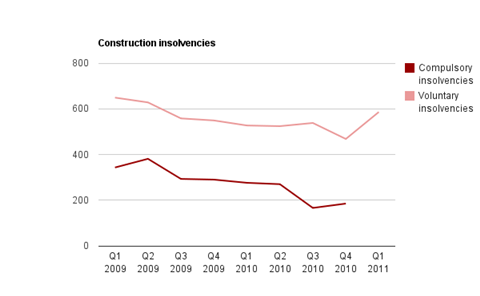