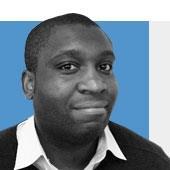 Ike Ijeh is happy to stand in the rain waiting for a London icon, but some unfriendly office blocks leave him cold

My wonder has a daily population of 6 million and is one of the most instantly recognisable urban symbols on earth. It is the red London bus, and it is as much a part of London’s urban landscape as the Gherkin – and although not every bus has the superlative design credentials of the old Routemaster, they are the ultimate examples of efficient, utilitarian street architecture.

Along with red post-boxes and K-series telephone boxes, they embody the kind of colour co-ordinated urban branding that Saatchi & Saatchi would die for. And in a vast, sprawling city with an indeterminate boundary and no gateway entrances, they are often one of the few signs that you are actually in the capital. London’s buses prove that “iconic” design has less to do with what an object looks like than what it represents.

New Zealand House, an 18-storey, 1963 office block in central London is my blunder. Why? Because in almost every aspect, from height to materials, it ignores its context and is completely at odds with the scale and character of its surroundings. Its corrosive impact is all the greater as it occupies a prominent corner site near Trafalgar Square and consequently wrecks the composition of local streetscapes.

NZH is a prime example of the damage that has been wrought upon historic locations across London by the insensitive positioning of tall buildings. Other offenders, including Millbank Tower, Park Lane Hilton Hotel and Victoria’s demonic Portland House, were also built in 1963. All indicate the dangers of letting London’s natural appetite for commercial dynamism override its civic responsibility towards urban form, a threat that sadly remains as pertinent today.

From the start of operations in the 1900s until the sixties, London has designed its own buses rather than using the bus makers’ standard products. Many of London’s local service buses over this period were built by the Associated Equipment Company, although other manufacturers also built buses to London designs. The last bus specifically designed for London was the AEC Routemaster, built between 1956 and 1968.

New Zealand House was designed by William Alington, the modernist New Zealand architect, while he was working in the London office of Robert Matthew and Johnson-Marshall. The 15-storey tower is 255ft high and located over a four-storey podium. It is occupied by the New Zealand high commission.