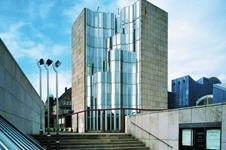 Sandy Nairne chooses two art galleries: one in Germany that set a new standard for art and architecture, and another in London that, unfortunately, did much the same

The Städtisches Museum Abteiberg, Mönchengladbach, is a public gallery that as a piece of architecture is startling, delightful and well planned. Designed by Hans Hollein, and opened in 1982, it fits in scale with its contents and its surroundings. It also represents a radical shift in the art of making interior gallery spaces that fit together more organically; it breaks both with the hermetic beaux-arts model and the modernist quest for perfect light in white rectangles and cubes.

Here the spaces are quite various in scale, works of art are hung to the available light and the inside doorways offer entrancing views rather than simply an enfilade procession of more door surrounds. It is impressive without being showy.

Some like the Hayward Gallery’s cool grey exterior and larger split-level spaces on the inside, but for me the gallery is an awkward, gawky building with little to redeem it. Built by the Greater London Council’s architects’ department (with crucial input from Dennis Crompton and other members of Archigram) and opened in 1968, it is not so much that it is frequently described as brutalist – which has its own place within postwar modern architectural styles – but more that it feels unforgiving, often making exhibitions feel like hard work or more tiring than they should.

It has been improved over the years (and often transformed at great expense for particular exhibitions), but it is not the uplifting and engaging space that contemporary art deserves on the South Bank.

The present Städtische Museum Abteiberg in the western German city of Mönchengladbach was the brainchild of local councillors in the sixties, who thought the museum needed more space. Hans Hollein was appointed to design the new gallery in 1972 and construction was completed in 1982.

The Hayward Gallery is part of the Southbank Centre, a perennial “favourite” in the blunders category. It opened in July 1968 and is frequently used as an example of brutalist architecture. The gallery, the design of which was largely driven by Dennis Crompton, is named after Sir Isaac Hayward, leader of the London county council until it was abolished in 1965.

Sandy Nairne is director of the National Portrait Gallery