The chart below shows Aecom’s index series since 2000, reflecting cost movements in different sectors of the construction industry and consumer prices. 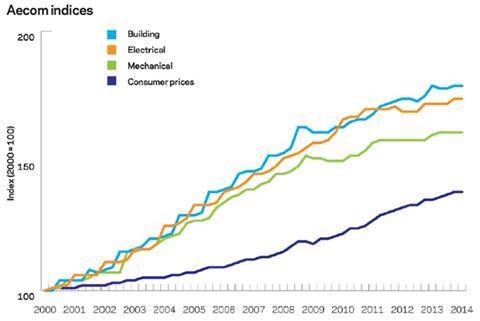 Although building costs rose marginally in the year to Q1 2014, the rate of change slowed significantly to 0.23%. Some of this sharp fall results from the delayed effects of wage agreements being implemented later in 2014.

The mechanical cost index slipped to 1.14% increase year-on-year in Q1 2014. This is the lowest increase in the last three quarterly updates.

The electrical cost index mirrored mechanical costs in the size of change, and is the only index to increase when compared with Q4 2013.

Annual inflation rate falls under the Bank of England’s target of 2%. Petrol prices contributed the largest component of the decline.

They are intended to provide an underlying indication of price changes and differential movements in the various work sectors but do not reflect changes in market conditions affecting profit and overheads provisions, site wage rates, bonuses or materials’ price discounts/premiums. Market conditions are discussed in Aecom’s quarterly Market Forecast (last published April 2014).

Price Adjustment Formulae indices, compiled by the Building Cost Information Service (previously by the Department for Business Innovation & Skills), are designed for the calculation of increased costs on fluctuating or Variation of Price contracts. They provide useful guidance on cost changes in various trades and industry sectors and on the differential movement of work sections in Spon’s Price Books.

Over the last 12 months, the 60 building work categories recorded an average fall of 0.08% on a yearly basis. A quarter-on-quarter increase of 0.39% underscores a muted theme of price movements in the majority of work categories, despite some larger rises in certain work categories.

Many of the largest decreases are in work categories relating to metals, which reflect broader trends in global metal prices:

The annual rate in March 2014 fell to 1.7% from 1.8% in February. This figure makes it the third consecutive month where CPI has returned under the Bank of England’s target rate of 2%.

The annual rate of change for industry output prices fell from 0.6% in February to 0.5% in March 2014. This slip comes despite output prices rising by 0.1% month-on-month in March 2014. Output inflation has slowed steadily since Q3 2011 and is now the lowest annual rate since October 2009. The narrower core index fell marginally to 1.0% in March when compared to the same month a year earlier.

Copper and aluminium prices fell quite sharply since February, as concerns continue over the economic slowdown in China. But nickel and zinc posted solid yearly increases, partly due to recent global supply constraints.

Click here or on the graph to view a larger version

Click here or on the graph to view a larger version

Materials price increases for the construction industry over the last 12 months are detailed below:

Housing activity and demand for related materials accounted for much of the headline change in construction materials price inflation.

The parties to the Construction Industry Joint Council have agreed a new pay deal, which sees pay rates increase by 3% from 30 June 2014, and a further 3% rise from 29 June 2015. Travel and fare allowances also increase from 30 June 2014, along with subsistence allowances increasing to £35 a night from 6 January 2015. The agreement also addresses changes to sick pay.

A 2.5% increase in hourly wage rates comes into effect from 6 October 2014. Amendments to the basic working week also apply from the same date, as the number of hours per week reduces from 38 to 37.5. Changes to the level of weekly sickness and accident benefit are also planned.

Members have received a 2% rise in hourly wage rates from 6 January 2014.

The Building and Allied Trades Joint Industrial Council (BATJIC) recently agreed a two-year pay deal effective from 30 June 2014. The deal involves variable wage rises for the standard wage rates averaging 2.5%. A further set of rises averaging 3% come into effect from 29 June 2015. Annual holiday entitlement will increase by one day, as of 29 June 2015, from 21 days to 22 days, making a total of 30 days including public holidays.