The pace of recovery, both in construction and in the wider economy, remains stubbornly slow across the Channel. Charlotte Ho-Souto of Arcadis EC Harris and Barbra Carlisle of EC Harris examine the dynamics driving the French building sector 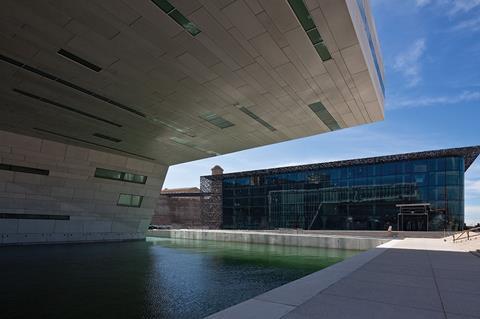 France has a population of 63.5 million people and is the largest country in western Europe. Paris has one sixth of the population living within its borders. The country is the world’s fifth-largest exporter both of goods and services. It imports more than it exports, and although the trade deficit shrank to its lowest since 2010, according to Reuters it still stands at over €61bn (£50bn), compared with its €74bn (£60bn) high in 2011.

Taxation remains well above the EU average. The average worker in France faced tax on labour income of 48.9% in 2013 compared with the Organisation for Economic Co-operation and Development (OECD) average of 35.9%, and France was ranked fifth highest of the 34 OECD member countries in this respect. The standard rate of corporation tax in France is 33.3%. The top rate of income tax is 41%. Companies face a new 75% payroll tax on salaries over €1m (£0.8m). Partly because of this, there is a “brain drain”, with New York and London home to more French nationals than many French cities.

France was initially less affected by the global economic crisis than its neighbours, notably Spain and Italy. The relatively limited openness to external trade, the large automatic stabilisers (such as the tight restrictions on mortgage borrowing and government regulation of the economy), together with the absence of a significant credit bubble in the years before the crisis, translated into comparative resilience.

In 2012 and 2013 GDP growth remained subdued, albeit significantly above the average for the euro area. The pace of recovery, however, has remained insufficient to put the unemployment rate on a downward path.

Despite France having low private debt levels compared with other OECD members, prudent lending practices, high household saving rates, a dynamic demography, the economy remains characterised by significant imbalances in public finances and external trade, along with high unemployment. Economic activity has been stagnating since the end of 2011, due in large part to persistent difficulties in the euro area and fiscal tightening.

Moreover, the rising imbalances related to export competitiveness and the high and increasing level of public debt cast doubt on the sustainability of economic recovery.

Despite being one of the most productive economies in the world, France suffers from a chronic under-use of labour. This reflects one of the lowest rates of employment in the EU after Sweden and Norway.

Fiscal policy wasn’t as tight in 2013 as initially planned, and the OECD expects the pace of fiscal consolidation to be reduced further in 2014 and 2015. It is recommended that future fiscal efforts should focus on restraining public spending, especially by cutting inefficient and non-priority items. Accelerating the implementation of a wide range of structural reforms to boost medium-term productive capacity would help consolidation and strengthen the credibility of fiscal policy.

The construction industry in France has been hard hit, and recovery is slow. In November 2013, Markit Economic Research reported contraction of the sector, falls in new orders and employment and an 11-month low in terms of business expectations. President Hollande’s “pacte de responsabilité” in January 2014 set out how to stimulate the economy through tax cuts and reduced red tape, and has been followed with a £3bn stimulus package for the highways sector. Contractor Vinci estimates this package would create 40,000 construction jobs.

The Euro 2016 football championship will be held in 10 stadiums across France. New stadiums and associated infrastructure are being constructed, and include the 58,000 Stade des Lumieres in Lyon, led by Vinci.

The president is elected by universal suffrage for a five-year term. Socialist François Hollande was elected in May 2012, and the Socialist party won control of the National Assembly. By October 2013, less than a third of French citizens approved of Hollande’s performance as president. The most recent municipal elections, held in March, delivered Hollande a crushing blow, with the Socialist party losing 155 towns of the 500 or so they had controlled, sparking a cabinet reshuffle.

Prime minister Manuel Valls was appointed directly after Hollande’s election debacle, and won a vote of confidence in parliament after unveiling planned tax and public spending cuts, in an attempt to dampen France’s public shortfall. Valls confirmed a package of €30.3bn (£24.7bn) in payroll tax cuts on companies by 2016, and said a revenue tax on companies, known as “C3S”, would be scrapped by the same date, handing £4.9bn back to business. He has also vowed to honour France’s European commitments on deficit reduction, announcing plans to cut £17bn from state pensions, healthcare and the social safety net as part of the £41bn effort to rein in the country’s debt and deficit. His government committed to reduce its deficit to 3% of the national output by 2015.

INSEE, the government statistical portal, forecast GDP growth of 0.7% by mid-2014, an increase of 0.3% on 2013. The growth is driven by manufacturing rather than construction, which is weighing down growth.

The construction market contributes 5% of GDP and employs 5% of the domestic workforce. Volumes are down 1.5% from 2013 and are not expected to increase in 2014. According to Eurostat, construction activity is down very slightly compared to 2010 although construction costs are up very slightly over the same period.

In 2011, there were 23.9 million m2 of construction projects in France. Public sector and industrial projects were the largest contributors to the non-residential new builds, adding 6.6 million m2 and 6.8 million m2 respectively. New office space accounted for 3.3 million m2.

The Franco-Italian Ecomouv consortium delivered the Eco-Taxe lorry tolling system on behalf of the French government under a 10-year concession. With a target of implementing a nationwide tolling system across 15,000km, this project was one of the most ambitious of its kind ever. Arcadis EC Harris, as lender technical adviser (LTA), monitored the construction process of the scheme, which was completed in 21 months. It is expected to raise €1.5bn in tax a year but tax collection is currently on hold.

Former president Nicolas Sarkozy’s “Le Grand Paris” project harked back to Philippe Auguste, Charles V and Louis XIII, with its plans to expand the boundaries of the city. Le Grand Paris involves €20.5bn of investment by 2025 in an 80-mile addition to the urban transit system - a combination of elevated and underground trains. There will be 72 new stations, and four colour-coded lines - blue (30km), red (100km), green (50km) and orange (29 km) - the first of which will be delivered by 2018. This is not to mention the intended 70,000 homes and nearly a million jobs the project claims it will create by 2030. At 60kmph, the average speed of the new metro will be twice the current one, and is predicted that it will replace 15% of car journeys.

Some 75% of France’s energy is derived from its nuclear industry. President Hollande’s commitment to reduce dependency on nuclear by 50% by 2025 should see a shifting energy landscape in the years to come, although change is yet to be seen on the ground. Low economic growth means fewer tax revenues, affecting the government’s ability to invest in alternative energy forms. Similarly, the levy on nuclear and fossil fuels, which only comes into effect in 2015, is having an impact on the cost-effectiveness of alternative sources for the consumer. In 2014 wind and solar sources are expected to add around 500MW of energy to the grid. Year-on-year energy prices are expected to increase by 1.6% in 2014.

In 2012, £10bn was invested in office space , a 19% fall year-on-year, although this represents 67% of all investment into France. Retail property saw £1.56bn of investment, an increase of 27% on 2011. According to estate agent Savills, most retail projects approved in 2011 (totalling 3.3 million m2) were for extensions rather than new build. Extension projects in 2013 included the 45,000m2 Beaugrenelle in Paris, which included a 7,000m2 green roof. New projects included the 65,000m2 Aéroville, linked to Charles de Gaulle airport, which opened in November 2013.

Rents across the different real estate sectors is likely to remain stable in 2014. The retail sector is performing better than the office and industrial sectors. Rental rates are around £218 per m2 per month, according to Business Monitor International. This is against a decrease in actual retail sales from £495.6bn in 2012 to £487.5bn last year.

Compared with London, Paris is relatively affordable, with prime prices at about £12,000 per m2. These have held constant for the past three years. House prices on average have been relatively resilient in the ailing market, with some regions doing better than others, helped in part by low interest rates. The market is expected to decline 4% in 2014, according to Standard & Poor’s, although the lack of new build is helping to shore up the house prices. Housing starts dropped 5% year-on-year in 2013. Although there is a need for 500,000 new homes a year, last year saw 342,000 housing starts, down 14.2% on the previous year. This is contributing to the decline in construction sector employees.

Prime residential market sales have been supported by international buyers, including those from the UK and Russia, seeking second homes in locations such as the Alps and Côte d’Azur. Buyers from the Middle East and Asia are increasingly common in the £8m-and-above residential market.

Public sector investment is being squeezed, with the president pursuing the EU target of reducing public deficit to 3% of GDP. Last year construction volumes in the public sector decreased 4%, although over 175,000 public homes were built.

PPPs are commonplace in France, though not all are successful. For example, the 30-year design, build, finance and operate (DBFO) south Parisian hospital contract with private French construction company Eiffage (set up in 2006) was terminated and all operations are to be handed back to the hospital in September 2015. At the same time Eiffinov, a subsidiary of Eiffage, secured a 27-year PPP DBFO concession for another hospital complex, this time in northern France, at a total value of £49m. PPP deals in the highways sector have faced some challenges, with French banks being increasingly cautious when it comes to financing project deals. The Vinci-led consortium for the Strasbourg bypass failed to secure finance in 2012, significantly stalling the project.

Although no significant growth is expected in 2014, the construction industry will continue to contribute £89bn to France’s economy. It is forecast that there will be £246bn capital investment over 2014, representing a very slight year-on-year growth.

Recent years have seen a year-on-year decline in the number of people employed in the construction industry. In 2014 it is forecast that there will be a 0.1% decrease in construction employees following a 1.47% drop in 2013. At the same time, Eurostat indicates that there has been a slight increase in salaries across the sector. 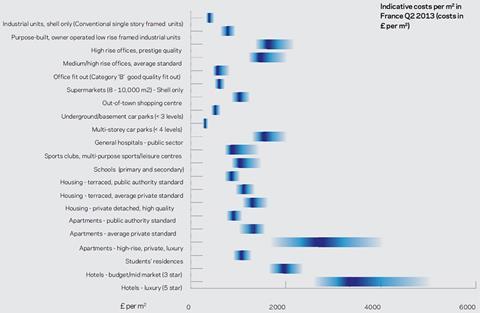