Phil Birch and Adam Mactavish of Sweett Group summarise some of the key elements in the draft bill to reform the electricity supply market, and consider the implications for commercial property 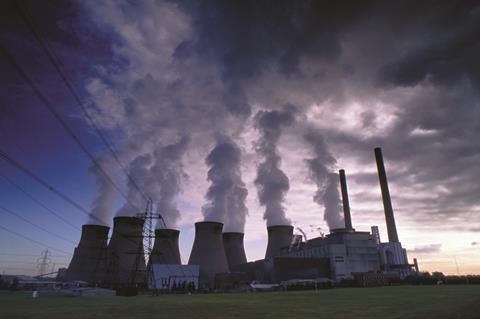 The Government’s recent draft Energy Bill sets out the proposed steps to electricity market reform (EMR). It is fair to say that the bill has received a mixed reception. While some parties expressed gratitude to see a significant piece of energy legislation published, others are less positive in their feedback. Their concerns are that it lacks clarity and is insufficient for decarbonising the UK’s energy supply in a cost-effective manner.

On publication of the draft bill, the energy secretary, Ed Davey, summarised the need for the EMR: “By reforming the market, we can ensure security of supply for the long term, reduce the volatility of energy bills by reducing our reliance on imported gas and oil and meet our climate change goals by largely decarbonising the power sector during the 2030s.”

Expanding on this, Davey highlighted the following drivers behind the introduction of the EMR:

The principal measures set out within the draft bill include:

Despite the bill setting some bold targets and requirements, concerns have been raised. These include:

As well as providing proposals for the structure of electricity markets, the draft bill provides some interesting insights into the future costs of energy in the UK. The projections of the Department for Energy and Climate Change (DECC) suggest that market reform will help to mitigate the potential for future price rises, but that this greater future security will come at the cost of higher energy prices up until 2020. Effectively, the policy will begin to protect the UK from unstable fossil fuel price levels, but this will incur significant transitional costs of about £110bn, which will need to be recovered through energy bills.

It is clear that with or without EMR the future of level of electricity bills is only likely to go up. Most people have expected this for some time, but the analysis supporting the draft bill provides a stark reminder. By 2030, energy costs in a typical office could be up to 8% of total occupancy costs and for many the costs could be 10% or more. The increase in the relative significance of energy costs together with regulations restricting the letting of buildings with poor energy perfprmance certificate ratings (F or G) means that energy performance should continue its inexorable rise up the agenda of developers and property companies.

The analysis below looks at the impact of projected increases in energy prices on operating costs for different buildings and provides some options as to how this impact might be mitigated. Figure 1 provides an excerpt from the impact assessment, setting out how energy bills are predicted to increase for the non domestic sector.

To assess the impact of the proposed increases, three building types have been investigated; these are described in figure 2. 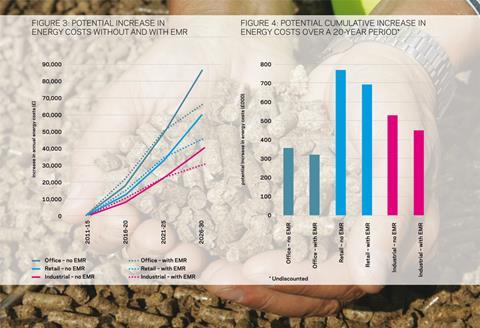 There are number of options available that when deployed at the appropriate moment (that is, at the correct time within the maintenance cycle) can make a significant dent in energy consumption. A range of “quick win” options are presented below in figure 5. The payback periods presented are discounted and based on DECC’s “Central” price scenario. DECC produces a range of different energy price scenarios, the central scenario is the middle option.

It should be noted that given the potential increase of energy costs put forward in the draft bill, many of the longer payback periods will be reduced considerably (further justifying the business case for deployment of the measures).

The numbers from the above table have been extracted from work that Sweett Group has recently undertaken on behalf of the Investment Property Forum (IPF). This report analyses a wide range of energy efficiency options and identifies the most effective ways to improve the energy efficiency of existing buildings. The report will be released towards the end of the summer.

Before the draft Energy Bill gains royal assent, further analysis will need to be undertaken so the government can confirm that it represents the most logical strategy to providing secure, affordable, low carbon energy in the future.

Analysing the forecast increases in energy costs demonstrates that the route to decarbonised energy is likely to be an expensive one, even if the alternative of relying on imported fossil fuels is even more costly.

If the transition to decarbonised energy is achieved, there still remains the need to reduce energy consumption on the basis that the cost of the “decarbonised” energy will be so high. Taking steps to make marginal investments in higher levels of energy performance during periods of planned investment, refurbishment or development is likely to pay significant dividends in the future.

Critics have raised concerns that the bill doesn’t provide assurance regarding requirements for energy efficiency to be addressed.
The underlying fact is that regardless of the EMR, energy prices are forecast to increase. Businesses wishing to retain a competitive edge should ensure that their buildings operate as efficiently as possible.