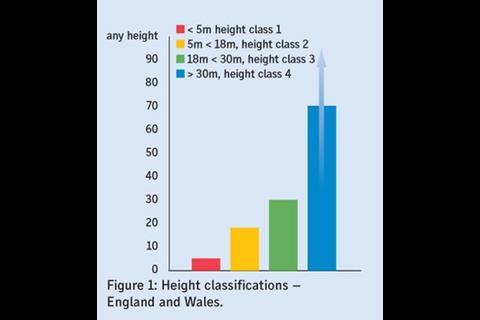 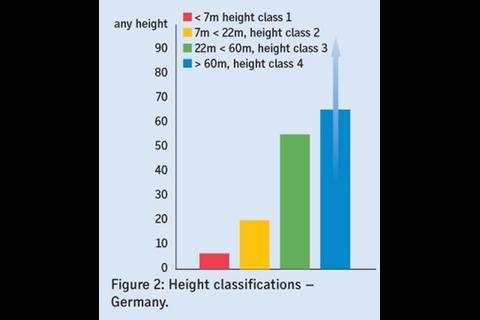 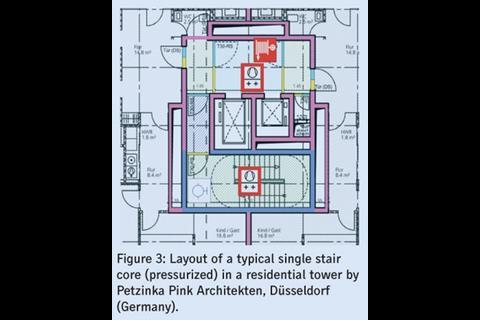 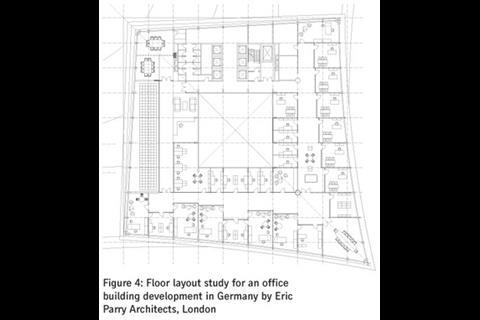 Single stairway buildings are a growing trend in high-rise developments. Such buildings have always presented unique challenges for designers and regulatory authorities, and have generally been tightly controlled by legislation and statutory guidance documents.

Single stair buildings are allowed in England and Wales and in Germany. This article compares the two sets of regulations. It aims to offer engineers and architects a better understanding of the problems faced in single staircase design as well as the potential solutions.

High-rise buildings are often assumed to be landmarks, such as the Burj Dubai in Dubai (818m) or the Sears Tower in Chicago (527m), but in England and Wales any building with a height (measured from the fire service access level to the top floor level) of more than 30m is classified as high-rise while in Germany any building over 22m is considered high-rise. The table on the facing page summarises the key differences between the fire regulations in England and Germany.

In both sets of regulations, buildings are classified depending on their height. In Germany a single stair could be provided within any office or residential building up to a height of 60m, whereas in England and Wales height and use determine whether a single stair is permitted.

In England and Wales residential high-rise buildings can be designed with single stairway provision of any height without pressurization in the stair core. In Germany a single stairway is not permitted for a residential building with a height of more than 60m.

Figure 4 shows a typical floor layout plan for an office development in Germany. The building has a height of 58m and is provided with a single stair core. Such a design would not be possible in England and Wales. However, in Germany, enhanced compartmentation and provisions for stopping fire spread from floor to floor, as well as pressurizing the single stair core, have been seen as compensation features that allow the omission of a second stair core.

The regulations have many similarities and it is perhaps the differences, for example the maximum height for single stair office buildings, that provide the greatest food for thought.

Given that fire death statistics in Germany and the UK are similar, it would be ideal if the fire protection advice regarding single stairs could be standardised across the European Union.

Fire statistics in England and Germany indicate that the death rate in offices is very low (nearly 0%). Given that occupants are generally awake and familiar with their surroundings, and that a high level of passive and active fire precautions are implemented in a typical office building, it may be time to consider if regulation in England and Wales should change so single stair office buildings could be permitted for buildings up to a height of 30m.

In England and Wales single stair provision depends on the use and height of the building, in Germany it is dependent on height alone.

Use of a single staircase for an office building is severely restricted. A single stair can be provided only under the following circumstances:

This restricts the maximum height of an office with a single stair to 11m. High-rise single staircase office buildings are therefore not usually acceptable.

Following the guidance in Approved Document B (2006), there is no restriction in height for a residential building. A remain-in-place evacuation strategy is preferred over simultaneous evacuation. This minimises distress or disruption to other residents in the event of a false alarm or small localised incident. This strategy requires only the apartment of fire origin to evacuate in the initial stages of a serious fire.

To ensure the safety of occupants, the following provisions are recommended under the Building Regulations:

In Germany, buildings with a height greater than 22m are classified as high-rise. This is, however, divided into two groups that reflect the different risks presented. These are:

In Germany, only height criteria are used to determine if a single stair option is acceptable, whereas in England and Wales single stair provision depends on both the use and height of the building.

Interestingly, the designs of the exit and stair sizes for a high-rise office or residential building in Germany are not based on the number of occupants per floor and either simultaneous or phased evacuation. Instead they are based on the following general assumptions:

The minimum clear widths given above apply regardless of the height of the building, the number of floors or the occupant load. This contrasts with England and Wales where the minimum exit width is calculated based on the following provisions (see also BS 9999):

Generally a phased evacuation or simultaneous evacuation strategy is in place for office and residential buildings. Fire service authorities in Germany would normally evacuate adjacent occupants within a residential tower or evacuate the whole building depending on the fire-fighting process.