Stephen Fry: 'We should be living in a golden age of architecture' 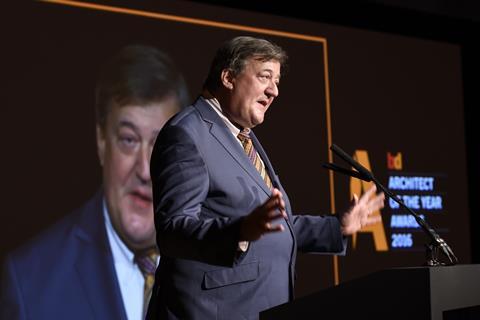 Problems like the housing crisis and mediocre development will be overcome by the “sheer shining talent” of Britain’s finest architects, Stephen Fry predicted at Building’s sister title BD’s Architect of the Year Awards.

The best architecture will filter down and eventually become “ordinary and expected – and that’s a marvellous thing”, he said.

He praised the 800 architects at the awards ceremony for their part in shaping a better world and said theirs was a glorious calling.

Ugliness was a moral failure, he said, singling out Leo A Daly’s Trump Taj Mahal casino in Atlantic City as a particularly egregious example, likening it to a marble abattoir.

Earlier, giving the keynote speech at the Ecobuild conference, he warned that our best architects were building abroad because they were not appreciated here.

And he articulated “everyone’s nightmare” that English towns and cities were being “world-glossed” into Dubai.

“We ought to be living in a golden age of architecture, if we could allow architecture to take centre stage in the business of development and construction,” he said.

Every month “magical” new materials were invented which “together with a trained architect and enlightened public officials and contractors could allow us to live in a self-confidently modern age that could be thrilling.”

Instead he warned the country not to repeat the mistakes of the last century and build “offensive” flats with walls that could be punched through.

“We are led by crisis in this country and our crisis is housing, as it was after the war,” he said.

“Planners were being pushed to build, build, build and it took us two decades to see what happened. Now we are being told the same but we want to see proper housing. We want to build things that aren’t contemptuous of people and where we feel the architect has loved us and took pleasure and joy in leading us round a place.”