Expansion scheme would include eight new lines by 2040

West Midlands mayor Andy Street has been holding talks with the prime minister about plans to transform Birmingham and surrounding areas with a £15bn Tube-style metro system, Building understands.

The city already has a light rail network but Street, who announced the plan this week, wants to build eight new metro lines and 21 stations by 2040. Sections of the line will run underground using cut-and-cover tunnelling.

The project would cost around £750m a year and see over 150 miles of new lines opened, including a circular “Elizabeth line” in the city centre and the reopening of freight-only lines to passenger trains.

The Conservative mayor, who recently called on the government to get building HS2, has been talking to Boris Johnson over the past few months about the proposal – despite the Treasury not having committed to the plan.

Street warned the Conservatives in December that they “have to deliver” following their election victory which saw the party gain six seats in the West Midlands.

Work to upgrade existing tracks is underway, with Street tweeting yesterday that “the foundations are literally being laid around the region, with the diggers in the ground”.

He added: “For too long we have been left behind by London and Manchester and other cities around the world. We are a world-class city region and we deserve a world-class metro and rail network. This plan will connect communities which haven’t had metro or rail lines for decades and restore pride in the West Midlands.”

Unveiling a multi-coloured Tube-style map, Street described plans to integrate the new lines with the HS2 station at Curzon Street.

Lines to be reopened include the Sutton Park line, closed in the 1960s, and the Camp Hill line, which closed in 1946. 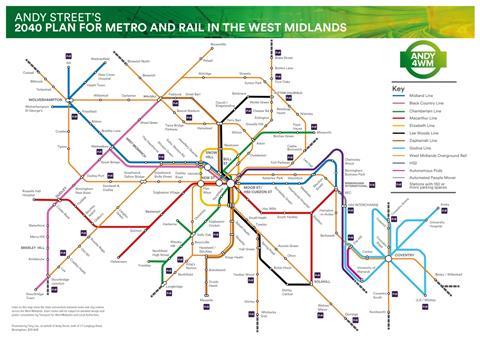 How the map of the planned West Midlands Metro will look