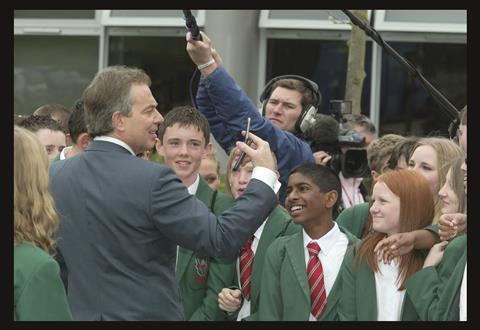 Tony Blair strikes a pose at a London school

As the major political parties promise infrastructure work galore if they get elected, Building looks back to the last time the country experienced a public sector spending spree. “Say hello to Tony. Tony is a prime minister. But Tony is sad, because even though he has lots of money and the kit for lovely new schools and hospitals, all his friends are too busy to help him to put them together,” wrote Building, in a feature headlined “Tony no mates”.

The government planned to refurbish every secondary school in the country and deliver 100 hospitals by 2010. Building wrote that this looked like “blind ambition” because there simply weren’t enough contractors to build everything.

“It is bound to overheat a construction economy that is already inflating at four times the rate of the Retail Prices Index. Huge construction projects at Heathrow Terminal 5 and Crossrail, as well as [John] Prescott’s massive housebuilding programme, will put even greater pressure on the limited resources of UK construction.“

“How do they not lose control of pricing if departments are competing?” said Robert Osborne, formerly of Partnerships UK, a public/private partnerships body.

Click here to read the full article from 30 April 2004