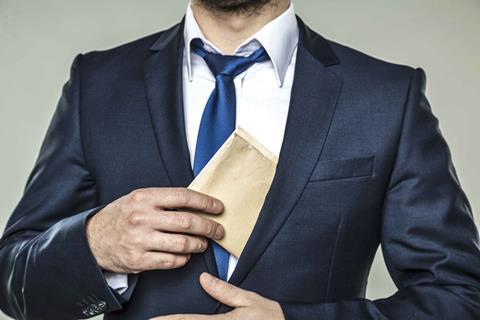 Cartels, corruption, construction – a trio we never like to see in the same sentence, but our examination this week of probes into the industry’s alleged shady practices is certainly not the first, writes Deborah Duke.

Building’s reporting of the 2006 OFT investigation into dodgy dealing was downright dramatic, leaving wrongdoers presumably quaking in their boots as they were placed at the centre of a sophisticated operation that sounded distinctly Line of Duty: “Sean McNabb, principal investigations officer at the OFT’s cartel division, told Building that powers to tap phones and track suspect vehicles had been used”.

Read: How government is cracking down on construction corruption

Chloë McCulloch: A corruption scandal is the last thing the construction sector needs

Crikey. But the article gets even more primetime drama than that: “Rights granted in June 2003 allow the OFT to use [powers] which also include breaking into suspected industry executives’ homes and hotel rooms,” presumably in search of brown envelopes and incriminating laptops.

There were also opportunities for concerned employees to do the right thing: “McNabb added that the OFT was also recruiting informants at suspected companies to help ensure convictions,” but reassured: “We would never release information of the informant involved, or even the fact of their existence.” H is for hush-hush.