This week we take a look back at the start of the millennium, when the construction of the Millennium Bridge was proving problematic, as this Building news story reveals 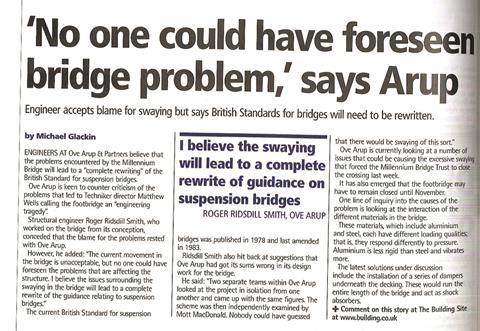 ‘No one could have foreseen bridge problem,’ says Arup

The turn of the millennium brought with it the construction of several landmark builds in London to commemorate the event, including the Millennium Dome, the London Eye and the initially troublesome Millennium Bridge. After reported safety concerns that the footbridge, which crosses the Thames between St Pauls and the Tate Modern, was swaying, it was closed on 10 June 2000, just days after opening, until the problem could be fixed. Meanwhile, the industry was searching for the culprit for the swaying bridge. On the 23 June 2000, Building reported that Over Arup & Partners had accepted blame for the bridge’s malfunction, but that the firm believed that the problems they encountered should lead to a “complete rewriting” of the British Standard for suspension bridges, which, at this point, hadn’t been amended since 1983. Ove Arup was responding to criticism from Techniker director Matthew Wells, who had told Building that the bridge was an “engineering tragedy”. The news piece reported suggestions to resolve the swaying included installing a series of dampers underneath the decking. This would later prove the bridge’s solution, as a combination of fluid-viscous dampers and tuned mass dampers were retrofitted to control vertical movement, allowing the bridge to reopen on 22 February 2002.