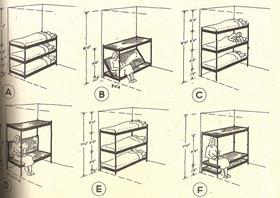 This week Building travels back 75 years to November 1940, when the design of bunk beds set to be distributed for use in shelters during the Second World War was called into question. The Builder reported on the unsatisfactory and uncomfortable design of the beds, and outlined how the bunks could be improved.

The report said: “The decision of the Ministry of Home Security to provide one million bunks for shelters was a welcome one. But hopes that at last a new leaf had been turned over were dashed when the designs for these bunks were issued to local authorities. It became evident that the old faults - lack of intelligent planning and petty economy - were still present. As these bunks are now in process of manufacture and there is no time to be lost if corrections are to be made, we are venturing to draw the attention of the public to the simple facts set out below.

“One million people are going to spend probably a third of their time in these bunks for some months and perhaps for some years to come. If the designs are not altered two-thirds of these people (those occupying the two lower bunks) are going to lie in considerable and quite unnecessary discomfort.”