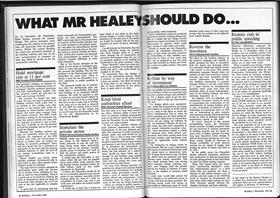 What Mr Healey should do

As the country awaits chancellor George Osborne’s Autumn Statement (currently scheduled for the rather wintery date of 3 December) - the final one before the election, Building casts its view back 40 years to 1974.

Just as now the magazine is looking to put together Agenda 15 - a manifesto to help steer the next government’s policy on the construction sector - so in 1974 it was offering advice to one of Osborne’s predecessors, the bushy eye-browed Mr Denis Healey, for his 12 November autumn budget.

A number of industry figures and a couple of our then hacks offer such helpful tips for the centre-ground Labour chancellor as: “hold mortgage rates”; “stimulate the private sector”; “keep local authorities afloat”; “reflate by way of investment”; “reverse the downturn”; and “restore cuts in public spending”. All of which sound like suggestions that people could make to our current government as it attempts to keep the economic recovery on track.