Concrete struggles to keep up appearances 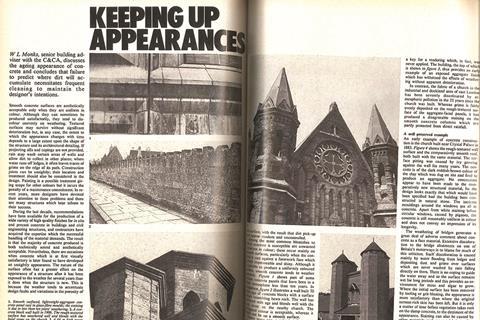 As the changing fortunes of specialist firms is put into focus this week, we revisit 1975, when the weathering and lasting appearance of concrete was a concern of senior building adviser W L Monks, writes Hollie Tye.

Monks described concrete as reacting unpredictably to the forces of nature, and detailed how the lack of foresight in knowing where dirt would accumulate resulted in frequent cleaning being necessary to maintain the designer’s intention.

“Smooth concrete surfaces are aesthetically acceptable only when they are uniform in colour. Although they can sometimes be produced satisfactorily, they tend to discolour evenly on weathering. Textured surfaces may survive without significant deterioration but, in any case, the extent to which the appearance changes with time depends to a large extent upon the shape of the structure and its architectural detailing.

“During the last decade, recommendations have been available for the production of a wide variety of high quality finishes for in situ and precast concrete in buildings and civil engineering structures, and contractors have acquired expertise which the successfully handling of the material demands. The result is that the majority of concrete produced is both technically sound and aesthetically acceptable.”