Ahead of the official opening of the National Theatre, Building met its architect Denys Lasdun 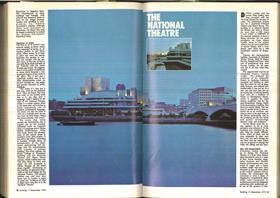 On 25 October 1976, the Queen officially opened the National Theatre, located on London’s South Bank, after a tumultuous build that had been disrupted by funding disputes, causing years of delays. The final design consisted of three theatres: the two biggest theatres, the 1150-seat Olivier and the 900-seat Lyttelton, occupy the main part of the building, and the smaller 400-seat Cottesloe Theatre is self-contained.

Ahead of its official opening, Building interviewed the theatre’s architect Denys Lasdun. Lasdun came to the project having had no previous experience with theatre design, but was intrigued by the spatial relationship between actor and audience. He said: “In the Olivier room the action appears to be in your presence; you embrace it. In the Lyttleton you confront the action. They are totally different forms.”

Speaking of the delays he said: “A great part of these delays was due to the constant monitoring of public expenditure and the time that was taken to redesign the building every time that someone said we have to cut £600,000 off, or another three quarters of a million - these were political figures. Somebody felt that it shouldn’t cost as much as it did and this meant overhauling the design three, four, five, six times.”