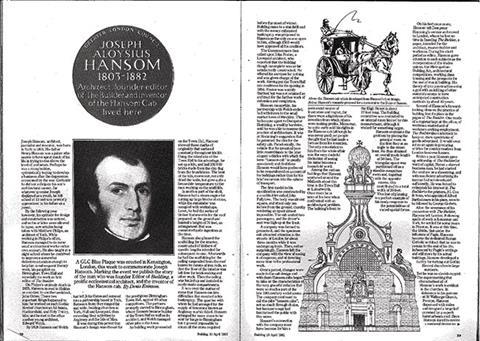 Joseph Aloysius Hansom, founder of Building magazine (or The Builder, as he knew it), is revered not only for his dedication to architecture (known best for his prolific ecclesiastical work) but also for his inventiveness. His ideas and arrangements when carrying out work on site were considered quite ingenious at the time, while his later brief foray into the world of transport saw him become inventor of the “Hansom cab” - a two-passenger safety cab. He also still finds time to write a weekly construction diary column. On 10 April 1981, Building published the story of Hansom’s life, instigated by the awarding of a GLC Blue Plaque in Kensington, London, to mark where he had once lived. An extract reads: “Hansom left Dempster Hemming’s service and moved to London, where he lost no time in founding The Builder, a paper, intended for the architect, master-builder and workman. During his short period as editor, Hansom gave attention to such subjects as the incorporation of the trades unions, the Metropolitan Building Act, architectural competitions, working class housing and the prospects for the use of iron in building. His theory of iron construction using a grid with an infilling of other materials seems to have anticipated construction methods by about 40 years.”