The 1981 election for the RIBA presidency takes an unprecedented twist 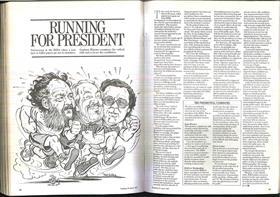 With nominations for the presidency of the Royal Institute of British Architects (RIBA) open, and a new president expected to be named in July, Building looks back to its coverage of the 1981 election - a significant year for the association.

Thirty-five years ago, RIBA headquarters issued ballot papers to all members for the first time in 50 years. It saw a tradition ended that had lasted for half a century, whereby the candidate selected by the institute’s council - in 1981 Andrew Derbyshire, whose son Ben has put his hat in the ring for the 2016 presidency election - was not opposed by any other member, as two last-minute candidatures set out to disrupt the system.

Graham Rimmer reported: “The man whose ‘natural right’ to succeed is being challenged is Andrew Derbyshire. He is the candidate of the mainstream establishment. He has been active in RIBA politics for over 20 years and is the council’s own choice for the post.

“It is this aspect of his candidacy that has provoked the declaration of opposition. Rightly or wrong, the ginger groups which back his opponents believe that an inner ‘magic circle’ is selecting potential presidents, grooming them, and then presenting the membership with them as a fait accompli, and this, they say, is not good enough.”