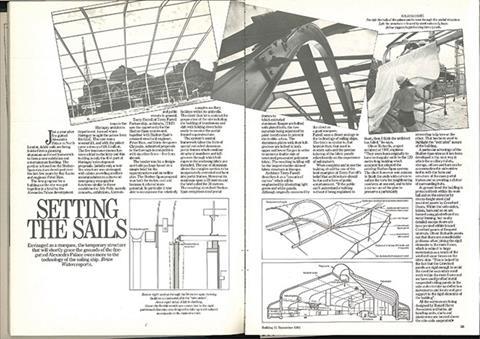 The fire at Alexandra Palace in 1980 was by no means near the scale of The Great Fire of London, but it did manage to wipe out half the building, leaving a mass of destruction in its path, writes Hollie Tye.

A year later, the north London palace was treated to a new exhibition in the form of fabric sails hoisted onto a steel framework. The temporary structure that filled the grounds mirrored that of a modern sailing ship.

Brian Waters reported: “The first proposal for a building on the site was put together in a brief by the Alexandra Palace development team in the Haringey architects department, formed when Haringey bought the palace from the GLC.

“The cost was a nominal £1, and with the palace came a dowry of £8.5 million. The fire insurance money has since been added to the kitty and this building is only the first part of Haringey’s development proposals. Initially only a tent-like structure was envisaged, with cabins providing ancillary accommodation to achieve an emergency stopgap for functions similar to those established at Ally Pally, namely concerts, exhibitions, festivals and public events in general.”