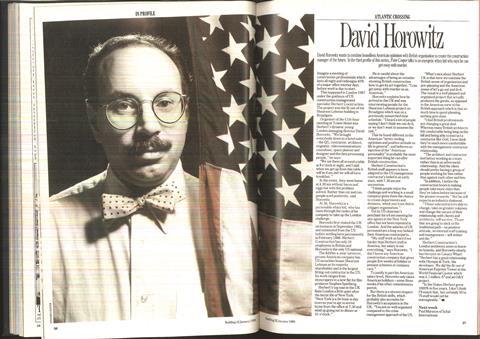 In our interview this week, Bill Hocking talks about reducing risk at Galliford Try and speaks fondly about his experience of moving to England from Zimbabwe. In 1988, US firm Herbert Construction’s David Horowitz had breezed over from the Big Apple to show sleepy little London how it was done and the way to wear a snazzy bow tie.

The “personable whizz kid” (aged 38) may not have endeared himself to our readers. “I can get away with murder as an American,” he said. He also believed that “an injection of the American personality” was the most important thing he had to offer.

He was finding the capital a little quiet compared with his home town. “New York is a 24-hour-a-day town so you’re apt to arrive home from the office at 7.30 and find yourself going out to dinner at 10pm.”

He carried this 24-hour approach through to his work, with one crisis meeting for an fit out redesign running from 8pm at night to 4.30am the next morning.

However, he had plenty of praise for the British construction industry: “You are so well organised compared to the crisis management approach of the US.”  So at least a little of the legendary American charm made an appearance.

To read the full article from 22 January 1988, click on the pdf below.