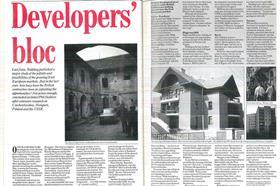 With Great Britain voting to exit the European Union last month, we take a look back to 1991, when opportunities for the construction industry in Eastern Europe were there for the taking.

As the Eastern Bloc crumbled with the fall of the Berlin Wall in 1989, it provided an opening for contractors to move in and take advantage of the new free markets, although Britain appeared to be late to the game.
Phil Hudson reported: “Many of these contractors got involved in Eastern Europe before the political upheavals and now the investment climate has improved further.

“Of course there are still great risks involved, but the returns are beginning to match investment. While local labour costs are low, and projects often involve non-payment for land, rents for offices across Eastern Europe now compare with Western levels.

“While British contractors produce a small restaurant here, maybe a factory there, the Austrians, Finns, French and Germans are into their second generation of major schemes with equity interest in development joint ventures.”