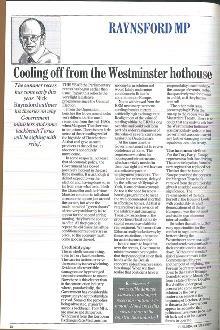 As the top 150 contractors face an uncertain political environment and parliament embarks on its holidays, we recalled another summer when the government was probably pleased to scuttle off to its vacation, writes Helen Burch.

“There is little sense of the crusading zeal of the high tide of Thatcherism,” said Nick Raynsford, our MP commentator. “It is as though [the Conservative government] did not expect to win the election and, having done so, is far from clear what to do.”

While it is impossible to avoid comparison with our present government – apart from the fact that the Conservatives managed to keep their majority in 1992 – the economic situation was very different because the country was plunged in the depths of recession.

Our writer felt that politicians had a good chance to stimulate recovery in construction, but had instead decided to “wait for events to unfold as if they had no control”. New housing and infrastructure were desperately needed, said Labour’s Raynsford - as was the boost they would bring to employment prospects.

Europe was also a source of tension (imagine that …) as opinions on the Maastricht Treaty acted as a dividing line between Thatcherite loyalists and the new regime.

To read the full article from 24 July 1992, download the PDF below