As the new government is pressed on the housing shortage, we look back to 20 years ago when it was a different story 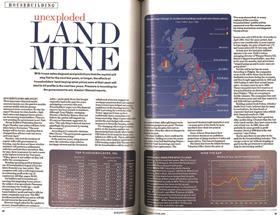 The new government is being pressed to take immediate action on housebuilding in order to have any chance of meeting its ambitious pre-election housing targets, with the current shortage having driven prices out of the range of those attempting to get on to the property ladder. It’s a different story to 20 years ago, when housebuilders were angry having bought land when prices were at their peak, amid predictions that house prices would stagnate for several years - with some going as far as to say the next 20 years. As such, the sector was putting pressure on the government to restore faith in the housing market.

Alastair Stewart reported: “However long it takes for the market to recover, housebuilders are certain to suffer - particularly those that bought expensive land in the past two years anticipating a recovery this year. Housebuilders’ anger over this financial squeeze has been turned on ministers. Although Tony Pidgley, managing director of Berkeley Homes, does not believe the market will stagnate for 20 years as Panorama suggested, he says: ‘The only thing it showed was how appallingly the government is running the economy.’”