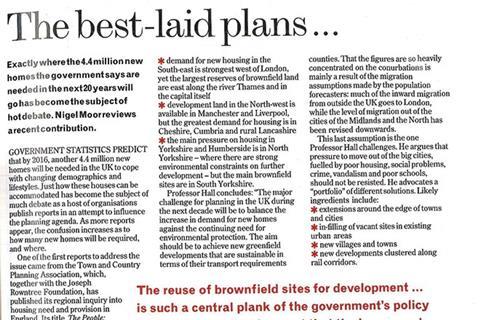 This week in 1996, concerns surrounding the need for more housing within the UK appeared to mirror the current housing crisis in London, writes Hollie Tye.

With the government declaring the need for 4.4 million new homes by 2016, the topic of where they would go became a hot debate as various organisations published reports in an attempt to influence the planning agenda.

Nigel Moor reported: “Breheny and Hall’s [editors of one of the first reports to address the housing issue] most controversial conclusion is that although government policies promoting the use of former industrial sites have been successful to the point where 50% of housing development is currently on reused “brownfield” land, the average in years to come is likely to fall short of government targets by reaching only 30%-40%.

“The debate has only just begun, but a number of central issues need to be addressed now. The prospects for the continued development of urban brownfield sites can be improved if sites with major problems – contaminations, poor access, weak demand, high cost – are subsidised.”