Labour predicts that plans for Regional Development Agencies will spread quickly across the North if elected, ahead of the 1997 election 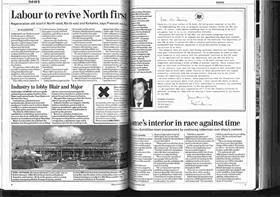 In last week’s issue Labour Party leader Ed Miliband addressed the construction industry in an open letter, saying: “Labour will devolve power and funding worth at least £30bn over five years to city and county regions across England”, writes Ethan Porter. Labour’s emphasis on regional development echoes a pre-election news story in Building’s 18 April 1997 edition where the former English Partnerships chief executive David Taylor, by then working as Labour deputy leader John Prescott’s senior policy advisor, told Building that plans for Regional Development Agencies (RDAs) in northern areas “would move very quickly, following like a wildfire” in the rest of England if Labour won. Following the election the RDAs were indeed implemented by the Blair government, before being abolished by the current coalition in 2012. And although it may seem only like yesterday that Tony Blair swept to power, technology has certainly moved on; today we gauge readers’ voting intentions online (you can vote at www.building.co.uk), but in 1997 we offered a free and confidential telephone hotline to conduct our poll.