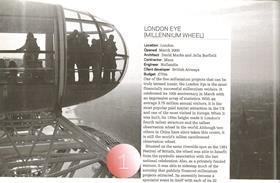 It was 15 years ago that the London Eye was hoisted upright to take its now permanent (it was originally only granted a five-year planning permission) spot on London’s South Bank. The successful lift on 10 October 1999 was actually the second attempt to get 135m-diameter wheel standing vertically, after the first was halted when sockets holding high-tension cables slipped. Speaking to Building a couple months after the wheel did go up, Tim Renwick, Mace’s man in charge of getting the £35m project turning, told how his team dealt with the disappointment. “The day we failed to get the wheel up we all went out and got blind drunk. The next day we just got on with it,” he said.

The wheel has also played a prominent role in a handful of Building features over the years. A notable example being a Valentine’s special in 2006, for which four couples who met through the construction industry - including the Eye’s husband and wife design team - were taken for a spin. In 2010, it was part of a 10-year review of the Millennium projects, when Ike Ijeh wrote: “It celebrated its 10th anniversary in March with an impressive array of statistics. With an average 3.75 million annual visitors, it is the most popular paid tourist attraction in the UK and one of the most visited in Europe.”