Foot and mouth wreaked havoc in the Cumbrian countryside 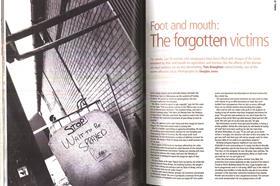 Foot and mouth: The forgotten victims

Fifteen years ago, the havoc wreaked by foot and mouth dominated headlines across the national media, writes Hollie Tye. The Cumbrian countryside was effectively shut down in an attempt to stop the spread of the disease, and agriculture and tourist industries were reported to be experiencing up to 80% downturns in trade. What the mainstream media paid less attention to, however, was the plight of construction workers.

Reporter Tom Broughton headed to Carlisle to meet local agricultural builder Keith Allen. In a report in Building on 20 April 2001, he said: “Allen is a builder, specialising in agricultural building. He holds the building and maintenance contract for the Camping and Caravanning Club of Cumbria. But like many small rural businesses, he has developed a number of sidelines to boost his income. He keeps a flock of sheep and runs a small caravan site on his land.

“Every aspect of his business has been affected by the crisis: his building work has ground to a halt because of the exclusion zones and movement restrictions. Tourists are steering well clear, leaving the caravan site empty. And now the Ministry of Agriculture is coming to inspect his sheep for signs of foot and mouth.”