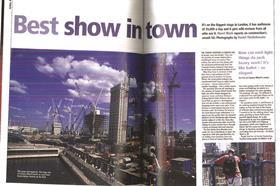 This week in 2001, Building reported on how audiences from across the country were travelling to the construction site of Canary Wharf South, where the spectacle of five high-rise office blocks being erected was proving a huge draw, writes Hollie Tye. Despite the industry’s assumption that the public would be uninterested in the development, the site became a tourist stop-off in its own right, with some spectactors crying out for a viewing platform.

Stuart Black reported: “The spectacle they are all watching is the creation of Canary Wharf South. Five high-rise office blocks designed by superstar tower architects Skidmore Owings Merrill, Kohn Pedersen Fox and Cesar Pelli are part of a development that will also include a vast underground shopping centre and a new park. It has become a crowd-pleaser because of its location: sunk 19m below the level of the dock behind huge cofferdams, it is easy to see the action from the elevated platform of Docklands Light Railway station adjacent to the site. Every day, tourists and commuters alike crowd the railings to watch workers hurry through a forest of latticed steel and concrete.”