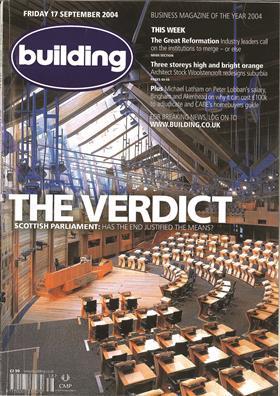 The collective gaze of the British Isles will be focused north of the border next week, as Scotland heads to the polls to decide whether it will remain a part of the UK or not. The debate surrounding the potential break-up has placed increased attention on the Scottish Parliament and its Holyrood HQ - a building that caused a considerable stir itself while being built. After a string of delays, the Enric Miralles-designed building opened in October 2004, having cost £414m to build - 10 times its original projected cost. Putting aside the problems that plagued its construction, the Building team ran a cover feature on 17 September 2004 focused purely on the building’s architectural merits, branding it: “An architectural masterpiece. And also, it has to be said, an architectural mess.” Continuing the review, architectural editor Martin Spring wrote: “Being the centre of government, the parliament building is Scotland’s most important building. No doubt only a tiny proportion of the nation’s 5 million inhabitants will actually visit it, but all have the right to expect some instantly recognisable icon of their national democracy - the Scottish answer to Big Ben. The debating chamber and the MSP’s lobby provide just such iconic images, but there is none on the building’s exterior.”