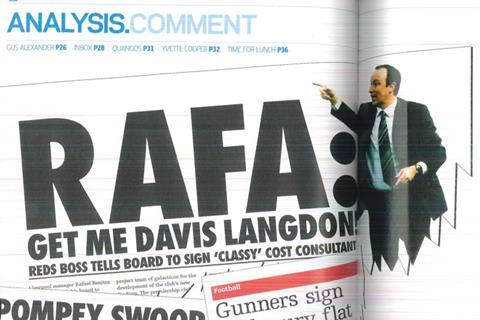 As the Premier League kicks off this weekend, Tottenham Hotspur temporarily occupying Wembley stadium while White Hart Lane is being rebuilt - with Mace as main contractor - ready for the 2018/19 season, writes Helen Burch.

A decade ago, Building decided the new season was an opportunity to focus on the lucrative arena of new football stadiums, seen by clubs as the bringers of “untold riches in extra gate receipts, corporate hospitality and sponsorship opportunities”. Boards hoped to develop their own version of Arsenal’s lucrative Emirates stadium.

“Every football club is looking to build something new,” said Barry Winterton, head of the sports division at Franklin + Andrews. “Any football club that hasn’t recently redeveloped or or built a new stadium will be looking at oportunities.”

However, a stadium lusted after is not a stadium built, as the list of proposed new grounds shows. Flashy CGIs of super-grounds for Liverpool, Everton, Portsmouth and Nottingham Forest are laid out, but as of this year none has materialised, although Everton have agreed a deal to acquire the Bramley Moore Dock by the River Mersey.

To read the full article from 10 August 2007, download the PDF below