A contractor has the audacity to deprive its workers of chips 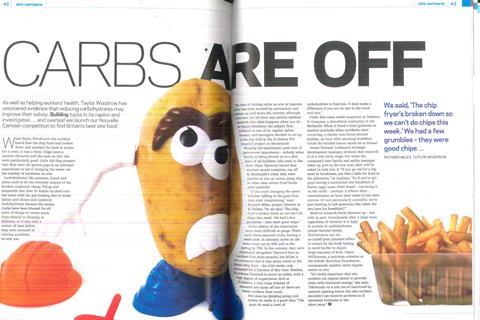 In the week the sector digested the chancellor’s spending plans, we took a look back to when Building was contemplating something more obviously close to workers’ hearts – or rather stomachs, writes Helen Burch.

Contractor Taylor Woodrow had declared war on carbohydrates. Research into the times that accidents happened on site showed a cluster occurred around midday, which was about an hour after the time that many workers ate a large breakfast. This led management to consider whether what employees ate was affecting their work – perhaps a large amount of carbohydrate was making them drowsy?

They decided to see what effect reducing the amount of starchy food on site would have. But they acted stealthily. ”We said ‘the chip fryer’s broken down so we can’t do chips this week’,” said project manager Richard Miles.

There was also a stomach-churning description of one man’s encounter with an item that shouldn’t have been in his food. ”Wedged in the roll between my greasy, undercooked slice of bacon and a dollop of HP sauce, was a sticking plaster.”

There’s an image that hasn’t got any more appetising in the last 10 years.

To read the full article from 23 November 2007, click on the pdf below.