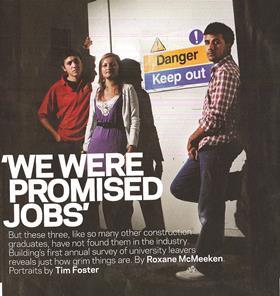 We were promised jobs

This week’s Class of 2014 magazine cover feature profiles the thoughts and aspirations of 14 faces new to the construction industry - and will continue to keep tabs on this intake to see how their opinions on the sector develop over time. It’s a particularly interesting time to plot the journey of these young people, as graduates and new starters joining the sector have been scarce in recent years.

Five years ago, on 11 September 2009, Building ran a feature titled We Were Promised Jobs, which cast an eye towards the state of graduate unemployment in the industry. Having surveyed 604 graduates from 2009 - including those with degrees in architecture, building surveying, quantity surveying and building management - the results showed that by September that year 61% did not have permanent, salaried positions, with many considering leaving the industry. A glance at some of the industry’s biggest firms also showed a steep decline in the amount of graduates being taken on. Speaking on the matter, Sir Michael Latham, chairman of ConstructionSkills, said at the time: “If graduates are not taken on now, when the upturn comes in a year or two, firms will be short of trained staff and therefore less competitive.”