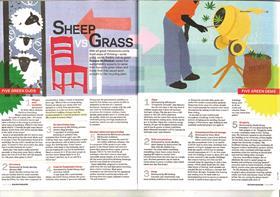 Five years ago Building dedicated an issue to a January detox - one that was designed to be implemented on a global scale. Spurred by the drive to cut the UK’s carbon emissions 80% by 2050, the issue put together a diet of wind turbines, biomass boilers and energy certificates that were - according to the experts - necessary to get construction in shape.

One feature within this green special - titled Sheep vs Grass - asked five sustainability experts to name their five favourite and five worst green ideas that they’d come across in construction. Among the list of dud concepts included sheep’s wool insulation (resulting in a moth infestation - as one expert found out for himself), go-slow kitchen taps and eco-towns. But perhaps the idea most ridiculed was this nomination: “A proposed £35bn project to put solar panels in the Sahara desert and send the power they generate down a giant cable to Europe.” According to architect Bill Dunster: “[This is] an idea loved by all developers who don’t want to meet their renewable energy targets. It is the ultimate off-site power generation fictitious fandango. And the cost would be unheard of.”