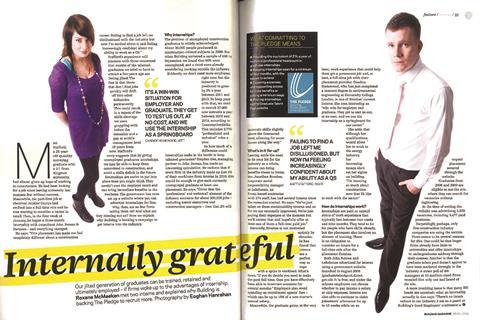 As the number of apprentices being taken on in construction is called into question, it’s worth noting that concern surrounding the lack of new entrants to the industry hasn’t sprung up out of nowhere. In 2010, Building reporter Roxane McMeeken met with two recent graduates who had benefited from individual work placements within the sector – with both noting that they had previously been considering other employment paths, due to the apparent inaccessibility of the industry. Questions were also raised about whether those responsible for recruitment within the sector were particularly in-the-know about the benefits that bringing an apprentice on board could have.

Speaking to Matt Stafford, who had recently completed an internship at John Rowan & Partners, Roxane McMeeken wrote: “Stafford’s experience will resonate with those concerned that swaths of the talented graduates we tried so hard to attract a few years ago are feeling jilted. The fear is that those that don’t find jobs quickly will drift off into other industries permanently. This could result in a repeat of the skills shortage we were grappling with before the recession and a gap in middle management level 10 years from now.”

To read the full article from 29 January 2010, go to www.building.co.uk/archive