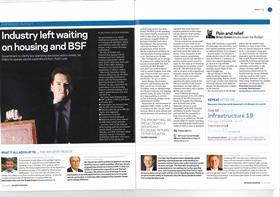 In the week that we see George Osborne’s last Budget of this parliament, we decided that our regular trip down Memory Lane should involve coverage of Osborne’s first Budget, back in June 2010. Fresh from the election that saw the creation of the coalition between the Tories and the Liberal Democrats in May of that year, Osborne’s first budget was to give a flavour of the new government’s deficit reduction plan, with huge public spending cuts expected. At the time a slightly more rotund chancellor was keeping the industry on tenterhooks by putting off final decisions on the fate of the Homes and Communities Agency (HCA) and the Building Schools for the Future programme (BSF). Announcements were not made in the Budget itself but came out over the following months. The HCA survived, but was merged to incorporate the Tenant Services Authority and downscaled. BSF was replaced by the somewhat less ambitious Priority School Building Programme (PSBP). While the introduction of Help to Buy in 2012 allowed this government to deliver a powerful boost to housebuilding, the jury is still out on the success, or otherwise, of PSBP. Who knows what the legacy of this week’s Budget will be, or indeed if it will be Osborne’s last ever chance to present the red Budget box to the nation’s media.