The mists of time to come 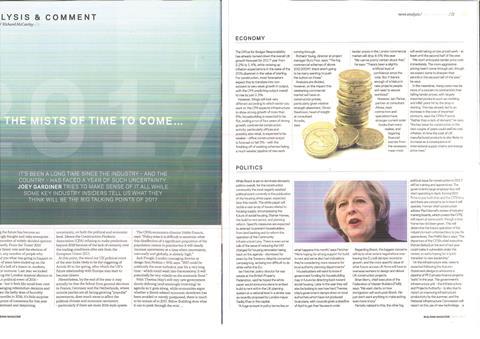 The mists of time to come

Despite our predictions piece for 2017 commenting that soothsayers had received “a hell of a lesson in modesty” in 2016 and cautioning that trying to see into the future was a risky business, we showed no such reticence in our own forecasts, with a slew of prominent construction voices suggesting what we could expect.

“2017 could be politically the most turbulent year for a very long time – which could wash into the economy. It will potentially be very volatile on the economic front,” said Jack Pringle of Perkins+Will. While the snap election has certainly caused political upheaval, the economic state last year was a gradual decline into disappointment rather than a crash – although several large firms have suffered problems.

However, it can be safely assumed that some themes will recur every year: Redrow  chief executive John Tutte discussed the challenge of planning permission and looked forward to the Housing Infrastructure Fund. And since housing remains a bright spot in the industry, at least one sector can be fairly sure of a happy new year.

To read the full article from 6 January 2017, click on the pdf below.