The quarterly analysis of changes to costs and prices shows the industry in general on an upward curve, as consumer price inflation continues to rise

Building cost index
The index has been rising for the past six months as materials prices have recovered falls seen in the first half of 2009.

Mechanical cost index
Mechanical materials prices, which have remained fairly flat for the last nine months, coupled with a wage freeze since October 2008, have kept the index relatively steady. 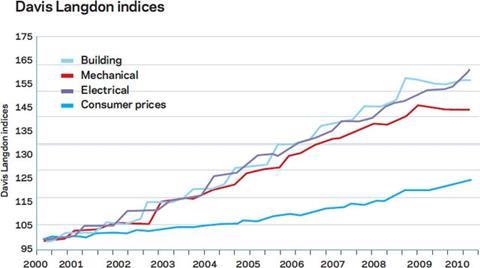 They provide an underlying indication of price changes and differential movements in the various work sectors, but do not reflect changes in market conditions affecting profit and overheads provisions, site wage rates, bonuses or materials’ price discounts/premiums. In the current market, most costs recorded here are rising but prices charged to some clients are still falling. Market conditions are recorded in Davis Langdon’s quarterly Market Forecast (last published 30 April).

Price adjustment formulae indices, compiled by the business and innovation department, are designed for the calculation of increased costs on fluctuating or variation of price contracts. They provide useful guidance on cost changes in trades and industry sectors and on the differential movement of work sections in Spon’s Price Books.

Over the last twelve months between May 2009 and May 2010, the 60 Building Work categories have recorded an average rise of 4.2%, sharply up from the 1.4% three months ago.

The largest price increases over the past year have been:

These reflect the large increases that occurred in metals prices mostly throughout 2009, though all have recently suffered some price retrenchment. The recovery in timber prices through higher worldwide demand and the lower value of sterling is also reflected above, as is the recovery in steel prices. Six months ago 26 of the 60 work categories recorded a drop in prices over the preceding year; now only 5 work categories show a decline, none more than 1.8%:

Materials: Metals and oil are continuing to push up industry’s input costs and prices

The CPI has now been above the government target of 2% for five consecutive months. The principal driver of the relatively high figure has been a 25% increase in the price of fuels and lubricants, following the rise in oil prices over the past year. The retail prices index (RPI) is up to 5.3%, its highest level since 1991.

The surge in industry’s input costs over the past year has largely been the result of the 60% rise in the price of crude oils. But the input costs of industries, excluding the food, beverages, tobacco and petroleum industries, have also started to rise quite sharply since the beginning of the year with substantial rises in the price of items such as imported metals.

Metals prices
The global downturn was accompanied by a sharp decline in commodity prices but most have since made a robust recovery. Some metals prices - notably copper, lead and zinc - more than doubled last year though they remain below the peaks registered in 2008. The rapid about-turn was owing in large part to the faster-than-anticipated recovery in emerging Asian economies.

Most metals prices eased back in the past month over fears of Europe’s debt crisis holding back recovery. Copper prices have shown the greatest extremity, rising 180% between December 2009 and April 2010 but falling 16% since then. Aluminium prices peaked in mid-April, 95% up on February 2009, but have fallen 19% in the past month.

Construction industry
Materials price increases over the past year are detailed below:

Overall, construction materials prices rose by 3.5% over the year to March 2010 and have generally been rising since last July.

The most significant materials price movements over the past 12 months are shown below: 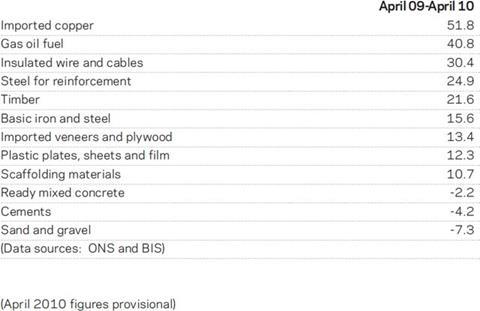 Labour: Wage freezes are beginning to thaw as the jobs market shows signs of recovery

The Building and Allied Trades Joint Industrial Council (BATJIC), the partnership between the Federation of Master Builders and the Transport and General Workers Union, has agreed new wage rates to apply from 13 September 2010. These have been frozen since 9 June 2008, but from 13 September wage rates for the three principal grades of operatives will rise by 2%. It is planned that this settlement will last until 12 June 2011 when wage reviews will return to their normal anniversary date.

BATJIC rates apply to small-and-medium-sized building firms operating under the banner of the FMB. Operatives working for larger firms and employed under the Construction Industry Joint Council Working Rule Agreement have also had wage freezes since June 2008. Talks are continuing between employers and the Union of Construction, Allied Trades and Technicians (Ucatt) regarding a wage review this year and no agreement has yet been reached.

Rates of pay and allowances for plumbers in England and Wales have been frozen since January 2009 but agreement has been reached for an increase in line with the retail prices index from January 2011.

In Scotland and Northern Ireland plumbers’ wage rates will remain static between June 2009 and June 2011, when rates and allowances will rise by 2%, almost certainly lower than the rise their counterparts in England and Wales will receive. However, from 7 June 2010 mileage allowances will increase from £0.25 to £0.30 per mile and the overtime threshold will reduce from 43 hours to 41 hours per week, nearer the 39 hours applicable in England and Wales. 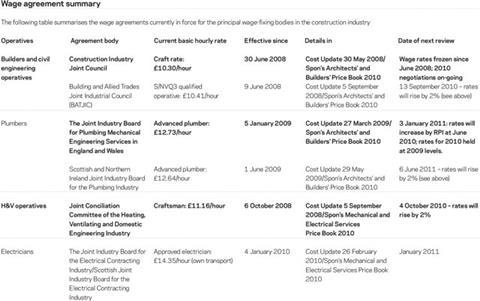