Building costs rose in the first quarter, but consumer inflation is falling, metal prices are sliding and manufactured goods are slowing down. Peter Fordham of Davis Langdon, an Aecom company reports 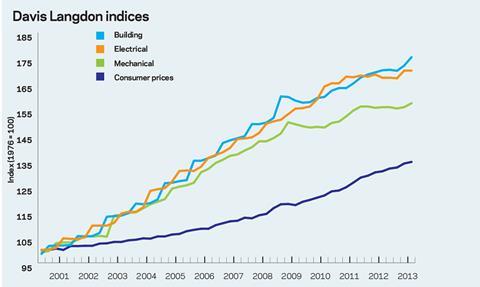 Increase of 1.9% in the first quarter 2013, leading to a jump in the annual figure to 3.0%. Largely the result of a 2% pay award to building operatives in January.

Index rose by 1.0% in the first quarter of 2013, resulting in the same percentage increase year on year. Partly due to increased pension payments byemployers for operatives.

Year-on-year increase of 1.6% is the highest since early 2011. Electricians received a 1.5% pay rise in January.

Price Adjustment Formulae indices, compiled by the Building Cost Information Service (previously by the Department for Business, Innovation and Skills) are designed for the calculation of increased costs on fluctuating or variation of price contracts. They provide useful guidance on cost changes in various trades and industry sectors and on the differential movement of work sections in Spon’s Price Books.

Over the last 12 months between April 2012 and April 2013, the 60 building work categories recorded an average rise of 1.1%, down marginally from the 1.3% reported three months ago.

The largest price increases over the last year have been in the following work categories:

Lead cladding has risen the most because lead prices rose steeply in the second half of last year.

The biggest price falls are associated with steel materials, with reinforcement prices dropping the most.

The largest fallers over the last year have been:

Materials: Most industry key indicators are on a downward trajectory

Input prices fell sharply in April by 2.3%, led by a 7.6% reduction in gas prices, a 6.3% fall in petroleum prices and 2.6% in imported materials prices generally. Key price movements over the last year have been:

Metals prices were generally on a rising trend from last summer but have fallen back quite sharply since February due to concerns over the speed of Chinese growth. Copper prices have begun a small recovery over the last month but all other metals have continued to fall.

The most recent trend is for the pound to strengthen against the euro but fall against the dollar as the European recession deepens and the US economy shows further signs of improvement.

Materials price increases for the construction industry over the last year (to March 2013) are detailed below:

A few materials have shown above or below average price movement:

The table demonstrates the decline in steel prices that has occurred over the last year. European steel prices fell by 15% between spring 2012 and the end of the year. A recovery at the beginning of the year was short-lived and prices are back in decline.

Labour The construction workforce has fallen to 2001 levels, with earnings at a five-year low

From 28 January the contractual pension contribution paid by employers on behalf of operatives increased from 1% to 2% but they had to wait until 1 April before receiving an increase in hourly wage rates, two-and-a-half years after their last increase. From 1 April, all hourly wage rates rose by 1.5% with corresponding increases in premium rates, responsibility and daily travelling allowances. The agreement also provided for a further increase in the level of contractual pension contributions paid by employers from 2% to 3% of all basic pay from 7 October 2013, followed by an increase from 3% to 4% in October 2014.

The hourly rates of wages that came into effect on 1 April 2013 were:

The pay of local authority craft and associated employees was caught in the government’s three-year pay freeze for local authority workers. With no pay review since April 2009, employees received a 1% wage increase from April 2013. New weekly rates of pay became: