Labour cost inflation remains the primary culprit for a continued rise to building costs, but the rate at which materials costs are growing is still moderate. Michael Hubbard of Aecom reports

Building cost index
A composite measure of building costs increased over the last 12 months by 0.6% at Q1 2016. Labour costs continue to rise but materials cost inflation overall is much weaker.

Mechanical cost index
The rate of annual change increased to 1.1% at Q1 2016 from 1% in the preceding quarter. Labour cost inflation still accounts for most of the annual increase. 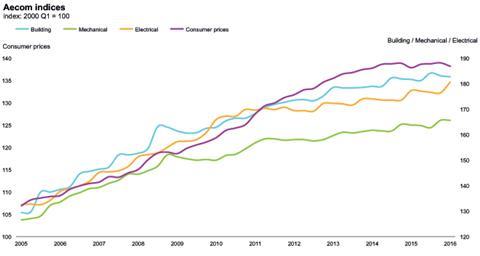 Price Adjustment Formulae indices, compiled by the Building Cost Information Service (previously by the Department for Business Innovation & Skills), are designed for the calculation of increased costs on fluctuating or variation of price contracts. They provide guidance on cost changes in various trades and industry sectors – ie. those including labour, plant and materials – and on the differential movement of work sections in Spon’s price books.

The 60 building work categories recorded an average increase of 0.14% on a yearly basis. Higher increases were recorded in the following categories:

Construction industry
The All Work material price index fell by 1.6% in the year to April 2016, marking 17 consecutive monthly decreases on a yearly basis metric. Housing-related materials dropped by 0.7% over the last 12 months. Non-housing materials prices also fell over the year, declining by 2.1%. Mechanical and electrical services materials prices extended their slide too.

Consumer price inflation rose by 0.3% in April. In his sixth letter to the chancellor, the Bank of England governor Mark Carney gave the following reasons for below-target inflation in the last year: “Sharp falls in commodity prices, the past appreciation of sterling, and to a lesser degree the subdued pace of domestic cost growth.” A benign outlook for inflation remains the generally accepted central scenario. However, the EU referendum and associated currency movements might affect inflation medium term.

Input prices declined by 6.5% on a yearly basis up to April 2016. While the longer trend has been overwhelmingly negative, recent data continues recent moves to smaller annual price declines. Monthly percentage changes have been positive through the latter part of Q1 2016. Fuel, crude oil and domestic food led the declines. Core input inflation, which excludes volatile items, also posted a smaller annual decline in April than previous months. Both measures are following a similar trend after some divergence in 2015.

Factory gate prices declined 0.7% on a yearly basis in April, marking 22 consecutive months where prices have fallen. The core index, which is narrower because it excludes items such as petroleum and food, increased by 0.5% in the year to April 2016. 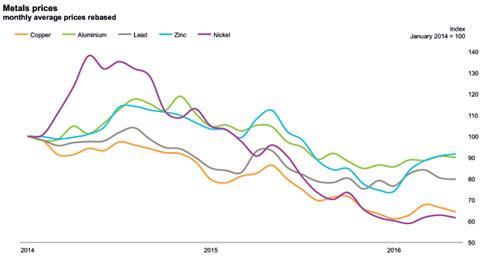 There is little sign of any significant change to the prolonged negative annual price trends for metal commodities. In theory, denominator effects may come into play such that the rate of negative yearly change slows. However, this may be offset by continuing weakness of demand-side factors, largely stemming from global macroeconomic conditions. Efforts to address over-capacity for metals commodities could provide some support to prices, as would a weaker US dollar.

GBP levelled out against the euro and US dollar in Q1 2016, although it regained some ground recently against its two major currency pairs. Some of this is attributable to an early poll lead for a Remain outcome in the EU referendum. But a recent reversal of this referendum polling saw sterling sell off once more. This highlights the FX volatility expected for the near-term period – which includes immediately after the referendum result too.

Construction Industry Joint Council
To date the parties to the Construction Industry Joint Council (CIJC) have not agreed a pay deal, after recent talks stalled. The most recent CIJC pay offer of 2.5% in June 2016, 2.75% in June 2017 and an additional day’s holiday from January 2018 was rejected by Ucatt. It is now seeking a new deal on wages and wider reform of the CIJC agreement.

Joint Council Committee of the Heating, Ventilating and Domestic Engineering Industry
A 3.0% increase in hourly wage rates came into effect from 5 October 2015. The daily travel allowance also increased by 3% from 5 October 2015. Amendments to the basic working week also applied from 6 October 2014, as the number of hours per week reduced from 38 to 37.5.

Building and Allied Trades Joint Industry Council
The Building and Allied Trades Joint Industrial Council (BATJIC) agreed a two-year pay deal effective from 27 June 2016. Workers will receive a 2.5% pay rise this year and a further 2.5% increase in 2017. Lower paid operatives will get a bigger boost of 4% this year, followed by 2.5% next year. The agreement includes a commitment that, if inflation in early 2017 is higher than 2.5%, then the 2017 pay rise will match this up to a limit of 3%.

They are intended to provide an underlying indication of price changes and differential movements in the various work sectors but do not reflect changes in market conditions affecting profit and overheads provisions, site wage rates, bonuses or materials’ price discounts/premiums. Market conditions and commentary are outlined in Aecom’s quarterly market forecast (last published May 2016).