Building, electrical and mechanical costs are rising at varying rates along with materials costs as sterling continues to fluctuate but wages have fallen slightly year-on-year

Mechanical cost index
The rate of annual change increased to 4.6% at Q1 2017. Notable materials price changes have contributed more to the overall increase this quarter, helping to propel the overall level of change to its highest rate in eight years. 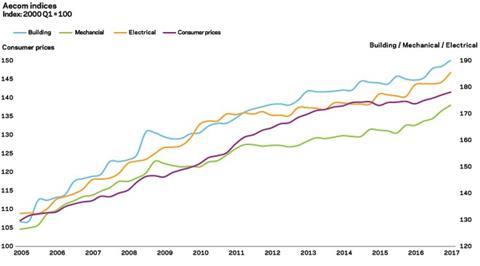 The 60 building work categories recorded an average increase of 5.6% on a yearly basis. Higher increases were recorded in the following categories:

Consumer price inflation rose over the year by 2.7% in April. Inflation reached its highest rate since September 2013. Consumer price inflation is now higher than overall earnings growth, leading to falling real wage levels. This is expected to lead to a squeeze on consumer spending in 2017. Increased costs of raw materials are now being passed through the supply chain, which will result in higher consumer prices this year.

Input costs increased by 16.6% on a yearly basis up to April 2017. Despite this high rate of yearly change, the pace of change slowed in Q1 2017 after rising quickly though the second half of 2016. Recent strengthening of sterling explains for the most part the slower rate of input cost increases. Metals and oil were the input cost components that saw the highest increases over the year.

Factory gate prices increased 3.6% on a yearly basis in April. Although input cost changes stalled in recent months, output prices have continued to rise. This marks more than 12 months of positive monthly changes to output prices.

A combination of higher input costs, continuing sound but weaker economic activity, a stronger export environment and increased confidence among manufacturers to pass on higher prices to consumers have all contributed to this sustained trend. 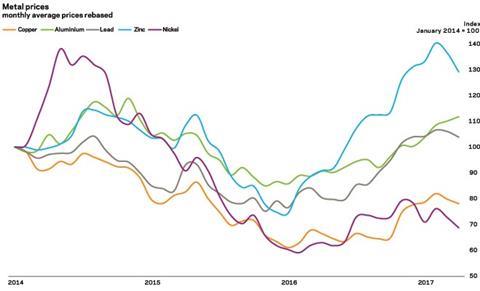 After a year of rising commodity prices through 2016, some of the gains were reversed in the first quarter of 2017. A reappraisal of global economic growth expectations – or at least the speed of growth – and their link to commodities demand, seasonal effects and a slip in Asian growth prospects all sought to loosen the strength of the price growth trends. 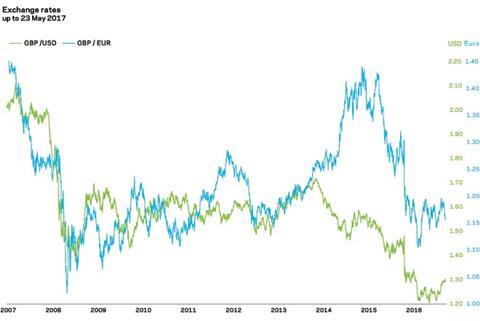 Sterling regained some ground against its major currency pairs during the first quarter of 2017. However, the recent general election outcome once again introduced more volatility into sterling currency markets. Political uncertainty in the UK was the over-arching reason for the currency movement this time, principally against the US dollar. Sterling is likely to fluctuate as the political narrative ebbs and flows at home and during the period of Brexit negotiations.

Following negotiations between the parties to CIJC, the council has agreed a two-year agreement on pay and other conditions. This is the second phase of a two-year agreement reached in June 2016. Hourly pay rates will increase by 2.75% in June 2017. Industry sick pay and subsistence allowance will also increase in line with the basic pay rate increases. Workers will receive an extra day’s holiday from 1 January 2017, which is worth an additional 0.4%. For more details on apprentice rates, daily fare and travelling allowance and other rates refer to CIJC document IR.2016.19.

A two-phase agreement has been agreed between BESA and Unite trade unions. Phase 1: 2% and 2.50% increases in hourly wage rate effective from 3 October 2016 and 2 October 2017 respectively. Phase 2: Covering period 2018/2019 and 2019/2020 involving increases in index and other benefits agreed in July 2016. Introduction of calculating daily fare and travel allowances has been changed from kilometres to miles. Workers’ annual holiday to increase from 23 to 24 days effective from February 2020. For more information on the agreement, refer to JCC letter 117 of BESA.

They are intended to provide an underlying indication of price changes and differential movements in the various work sectors but do not reflect changes in market conditions affecting profit and overheads provisions, site wage rates, bonuses or materials’ price discounts/premiums. Market conditions and commentary are outlined in Aecom’s quarterly Market Forecast (last published May 2017).